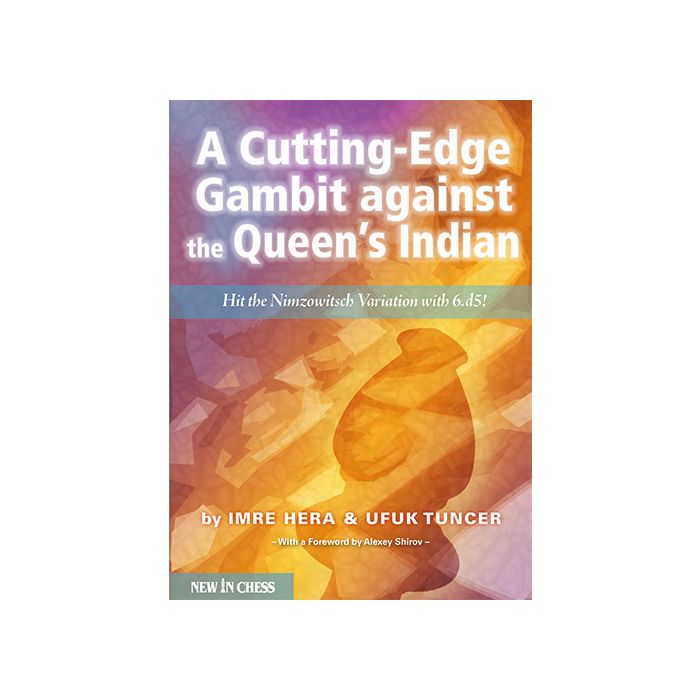 The ultra-sharp pawn sacrifice 6.d5 has caused a revolution in the 4… Ba6 line of the Queen’s Indian Defence in recent years.

The ingenious gambit was hotly debated at the highest level by players like Alexey Shirov, for White, and Peter Leko, for Black. At club level it became a dangerous weapon for attackers.

Hungarian grandmaster Imre Hera and Turkish FIDE master Ufuk Tuncer have charted this topical line and analysed it deeply. They give a clear overview of the history of the line and have thoroughly investigated all Black’s answers in separate parts and chapters.

The deep and often spectacular variations are illuminated by instructive and entertaining prose.

A Cutting-Edge Gambit against the Queen’s Indian aims to provide a repertoire for the white player, but anyone who plays the line with black is also well advised to study this work carefully! It presents countless brilliant resources and eye-catching novelties.

Imre Hera became a chess grandmaster in 2007 and has won many tournaments in classical and rapid play. He is a successful player in team championships throughout Europe.

Ufuk Tuncer is a Turkish FIDE master who lives in Germany. He is an active player and a well-known opening theoretician who has written highly topical Surveys for New In Chess Yearbooks.

Alexey Shirov:
“The book shows why the line is so attractive for White: fascinating chess, great complexity, chances to create fantastic attacking possibilities. This is exactly what we love chess for.”

Dennis Monokroussos, The Chess Mind:
"One reason this is an important line is that once Black has committed to a Queen's Indian, there aren't too many reasonable ways for him to avoid this gambit (..) [The authors'] work is thorough, accurate and creative. It's a very good book."

Carsten Hansen, ChessCafe:
"There is a massive amount of original analysis, fresh ideas, countless suggestions, and many novelties that overturn current evaluations."

Uwe Bekemann, German Correspondence Chess Federation:
"It is clear that the authors have done their utmost to make the variations transparent and understandable (..) They came up with quite a few novelties."

Marshtower Chess Reviews:
"Opened my eyes to a dynamic way of injecting life into one of the most solid of all defences to 1.d4. Even the World Champion, Magnus Carlsen, has played this way!"

Klaus Kreuzer, Rochade Europa Magazine:
"Working with this extraordinary book is made easy because every section has an the introductions as well as a summary."

Elburg Chess Reviews:
"This pawn sacrifice has been tremendously popular among top GMs ever since Vallejo Pons beat Macieja at the 2006 Turin Olympiad (..) This book shows us, as no other, the development of modern chess."

B.H.Wilders, Nederlands Dagnblad:
"The avarage club player is able to fully understand everything and learn a lot from this book."