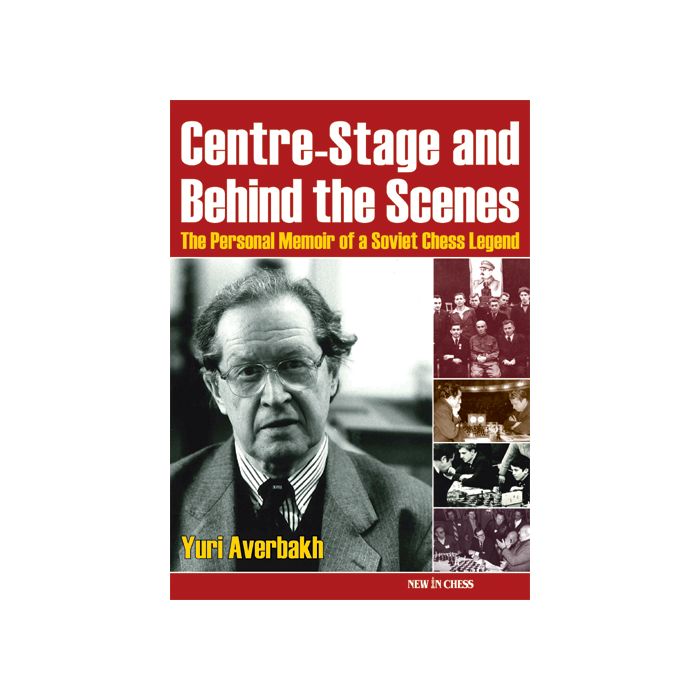 One of the most fascinating episodes in chess history is the rise and domination of Soviet chess. It would be hard to find a better qualified authority on this period than Yuri Averbakh, who was part of the successes in the international arena and witnessed the struggles for power behind the scenes.

Averbakh won the USSR championship in 1954 ahead of aces like Kortchnoi, Petrosian and Geller and was a successful grandmaster for several decades.

In this personal memoir he looks back on his days as an active player, but also on his experiences as a quintessential insider when chess was considered a vital ingredient of life in the Soviet Union.

Centre-Stage and Behind the Scenes describes the machinations of the notorious 'Sports Committee' and offers surprising personal views on Soviet players like Botvinnik, Smyslov, Kortchnoi, Petrosian, Tal and Spassky.

A unique, revealing and at times unsettling story - essential reading for anyone interested in the history of chess and the Soviet Union.

Yuri Averbakh (1922) is a distinguished Russian chess grandmaster who has enjoyed a long and varied career. He has been a top player, a journalist, an editor, an arbiter, a trainer and a long-time member of the board of the Soviet chess federation.

Averbakh won the USSR championship in 1954 and was a leading Soviet grandmaster for two decades. In this personal memoir he looks back on his days as an active player, but also on his experiences as a quintessential insider when chess was considered a vital ingredient of life in the Soviet Union.

Yuri Averbakh, who used to be known as the most powerful man in Soviet chess, is currently the oldest living chess grandmaster in the world.

Sean Marsh, CHESS Magazine, Best Books of 2011:
"A very readable and entertaining account of an extraordinary chess life and one which I will return to many times."

Martin Rieger, Rochade Europa Magazine:
"This book guides the reader through decades of important chess events, which will, because of Averbakh's memoirs, possibly be seen in a different light. Personally, I liked the book a lot."

Richard Vedder, Schakers.info:
"With nice inside perspectives on the relations between Soviet players: who is quarreling with whom, and who is not?"

James Pratt, British Chess Magazine:
"Yuri Lvovich looks back with a health mix of pride, regret, (understandable) caution, delight and interest at a game that has absorbed him since boyhood."

John Henderson, The Scotsman:
"A good read and a fascinating insight into the golden age of Soviet Chess."

ChessBase.de:
"A very personal autobiography (..) Exciting reading for chess friends who like to know more about chess than just variations."

B.H.Wilders, Nederlands Dagblad:
"Stalin and Beria are being discussed because of their influence on what happened in chess, but there are also comical anecdotes as when Unzicker pleaded with Averbakh for the release of Nazi prisoner Rudolf Hess (..) Anexceptionally interesting book."

Hans Ree, New In Chess magazine:
"This is a book for lovers of chess history about about a period that is gone (..) [Averbakh] could have said more but what he says is often quite interesting."