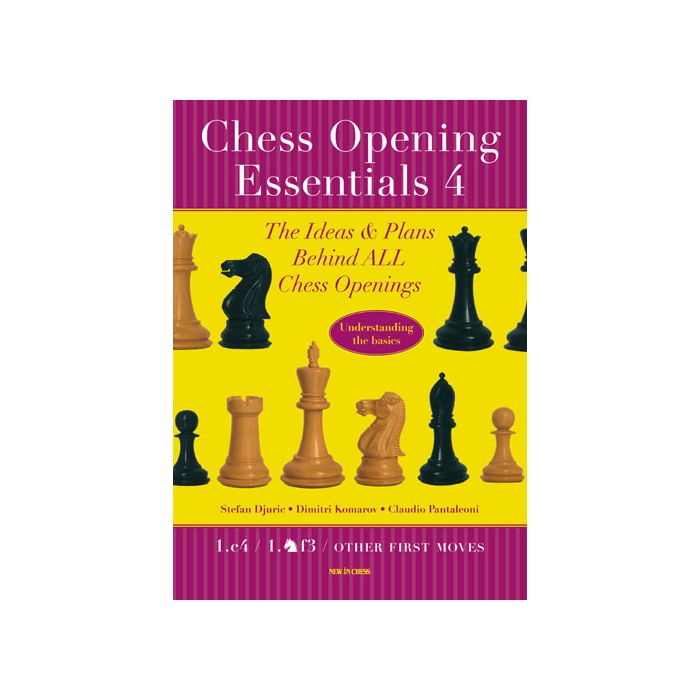 Chess Opening Essentials is an accessible primer and a reference book at the same time. It gives a flavour of how every opening works and explains the similarities with other openings as well as the differences. In addition, it also points at the various middlegame plans that apply after the opening has ended.

Grandmasters Dimitri Komarov and Stefan Djuric, and International Master Claudio Pantaleoni do not propagate forcing tactical variations to be memorized mechanically, but explain what you should actually be trying to achieve when playing the opening of your choice. They include the main alternative responses and give clear indications for further study.

This thorough, understandable, and very readable manual gives you a foundation on which to build your repertoire. Beginning and improving chess players should get this powerful book before they buy any other chess opening book!

Chess Opening Essentials
* Helps beginners to develop a solid understanding of fundamental opening ideas
* Gives casual players the ability to choose the opening that suits their style and taste
* A tool for club players to test and review their opening repertoire
* A reference book to which advanced players keep returning.

Buy all 4 volumes combined with a huge discount here.

FreeChess.com:
"All systems are clearly listed and presented, without losing itself in endless variations."

Schakers.Info:
"I don’t think something like Chess Opening Essentials, in this size, yet exists. For players with a rating up to 1900, this book covers a large part of the road."

British Chess Magazine:
"It gives an outline of each opening and major variation in turn, explaining the ideas and most popular choices for the benefit of elementary players. The reviewer was impressed by the practical advice given in the notes in this well-produced volume."

Nederlands Dagblad:
"It is about the basics of the opening, about ensuing middlegame positions, and about the plans one should pursue. Ideal for the club player who wishes to improve."

Carsten Hansen, ChessCafe:
"The authors have done a very good job. This is the best book in the series."

Erik Rausch, Rochade Europa Magazine:
"When you open this fat paperback for the first time, you will be surprised: colour! Compared with this, books from Everyman, Gambit or Olms look like black-and-white television (..) Not only is the main line explained and the reader made hungry for more, but he learns enough strategic knowledge and insider-tips to get, even if he plays the opening for the first time, into the middlegame safely."

Gary Lane, Australasian Chess Magazine:
"I like the way it handles information for club players."

Arne Moll, ChessVibes:
"The key positions of each opening are displayed in red (yes, red) diagrams. The name(s) of the inventors are in bold, red font, and references to other sources or sections of the book are also in red .. very useful for finding my way around the book."

Pekka Pakarinen, Suomen Shakki Magazine (Finland):
"A patzer like me, let alone someone with an Elo under 1700, should not buy a complex monography (..) be