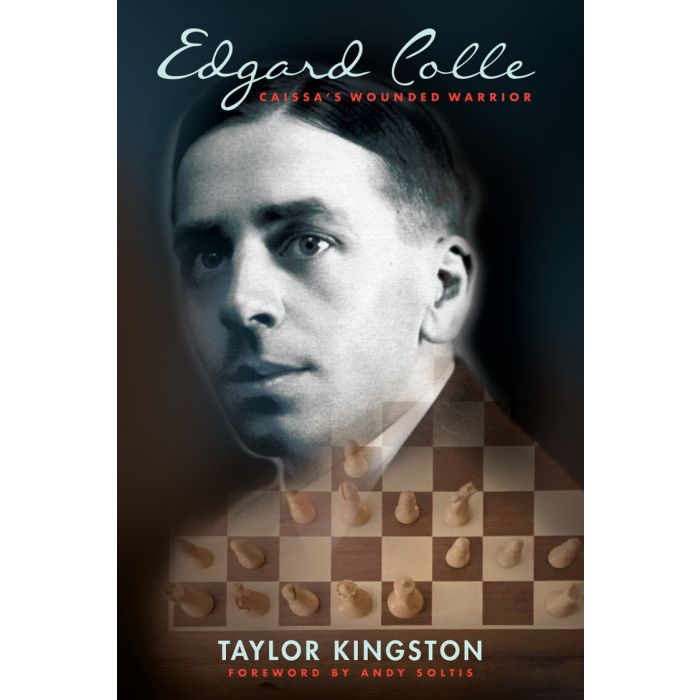 The Belgian master Edgard Colle was one of the most dynamic and active chess players of the 1920s and early 1930s. Though his international career lasted only ten years, Colle played in more than 50 tournaments, as well as a dozen matches. Moreover, he played exciting and beautiful chess, full of life, vigor, imagination and creativity. As with such greats as Pillsbury and Charousek, it was a tragedy for the game that his life was cut short, at just age 34.

Author Taylor Kingston has examined hundreds of Colle’s games, in an effort to understand his skills and style, his strengths and weaknesses, and present an informed, balanced picture of him as a player. Colle emerges as a courageous, audacious, and tenacious fighter, who transcended the limitations his frail body imposed, to battle the giants of his day and topple many of them. 110 of Colle’s best, most interesting, and representative games have been given deep and exacting computer analysis. This often revealed important aspects completely overlooked by earlier annotators, and overturned their analytical verdicts. But the computer’s iron logic is tempered always with a sympathetic understanding that Colle played, in the best sense,  a very human kind of chess.

Though not intended as a tutorial on the Colle System, the book has many instructive examples of that opening. Additionally, there is an extensive excerpt from Max Euwe’s Gedenkboek Colle, several other memorial tributes, biographical information about many of Colle’s opponents, his full known tournament and match record, and all his available tournament crosstables.

We invite the reader to get acquainted with this wounded but valiant warrior, whom Hans Kmoch called a “chess master with the body of a doomed man and the spirit of an immortal hero.”

About the Author:
Taylor Kingston has been a chess enthusiast since his teens. His historical articles have appeared in Chess Life, New In Chess, Inside Chess, Kingpin, and the website www.ChessCafe.com. He has edited numerous books for Russell Enterprises, most recently Emanuel Lasker: A Reader. He has also produced many computer-assisted analytical critiques of classic works by Alekhine, Capablanca, Euwe, Tartakower, Nimzovich, Najdorf, Fine and others. In this book, he combines history and analysis in a new look at one of the early 20th century’s most variable but brightest stars.

The Exchange French Comes to Life