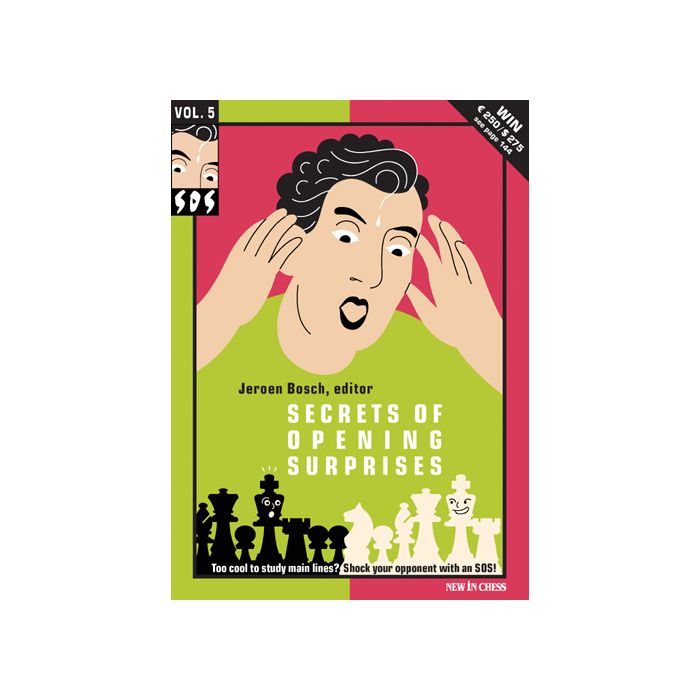 Anyone with a  rudimentary knowledge of the chess opening will be able to apply these SOS-ideas in an actual game.

a quick look at the SOS's in this issue

There is no need to study large quantities of stuffy theory, but there is an almost immediate return on the investment of a limited amount of time. Readers of SOS will baffle their opponents, gain crucial time, and stand a good chance to get an advantage in the game.

Readers of this series can ignore large areas of the ever expanding chess opening theory.

They can concentrate on these surprising ideas, because SOS variations deviate very early from the regular lines in mainstream openings.

Ideal for players who don’t have enough time to keep abreast with main line theory.

Rick Kennedy, ChessVille:
"For anyone who wants off-beat but sound and energetic ideas to punch up their opening repertoire, SOS is a great tonic."

Paul Motwani, The Scotsman:
"Full of delightful twists which I look forward to trying out myself in future games."

Carsten Hansen, ChessCafe:
"The variations can be exceedingly difficult if you are not prepared."

IM Watson, The Week In Chess:
"The most entertaining of books about openings that I know of (...) I recommend SOS because it is so much fun, to be sure, but also for its practical utility."

Chess Today:
"No matter what you play, you will find something exciting here."

The Washington Post:
"A refreshing book, full of rare, uncommon but sound ideas that can spice up the opening repertoire of any tournament player."

GM Glenn Flear:
"Tricky opening ideas, not much to learn, surprise value and lots of fun."

Bob Long, Chessco:
"For throwing your opponent off balance, it is hard to beat this series."

Rochade:
"A sparkling star in the grey sky of theory."