B 00-B 49
Author
The Chess Informant Team 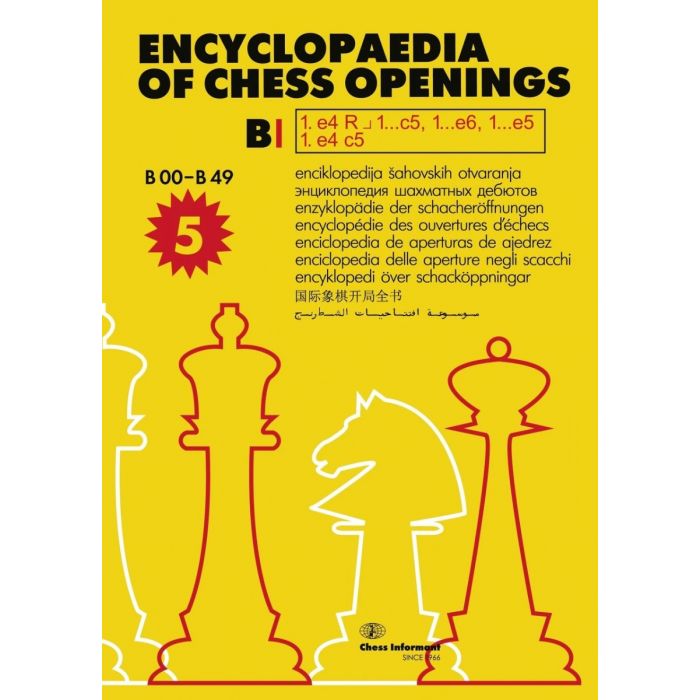 About / Encyclopaedia of Chess Openings BI

Half a century ago the first edition of the Encyclopaedia of Chess Openings was released, as a truly unique, ground-breaking tome. Such monumental work was a logical continuation to the Informant series which came to life a few years earlier. Chess Informant introduced a completely revolutionary system of chess signs, and also created the classification of chess openings, according to codes (ECO codes). Today Chess Informant’s ECO Codes and System of Signs are integral parts of the universal chess culture and heritage.

Over the years, and subsequent editions of five ECO tomes (A, B, C, D and E) all the greatest chess players and analysts contributed to the Encyclopaedias, each focusing on the sections which they were most acquainted with, producing astounding analyses and recommendations.

Eighteen years passed since the previous edition of the Encyclopaedia of Chess Openings - Volume B was released. We tried to keep all the major qualities of the previous ECO Volumes intact, but to make the book easier to read and browse through, especially when used as a source of reference. The material we gathered was so rich in details and nuances, so ultimately we decided to publish the ECO B Volume in two parts. We are positive that omitting any of the lines would be a terrible shame, so you will have the pleasure of reading and digesting the material in its completeness.

Finally, we are sure that the human touch should remain crucial, so all the members of the editorial crew gave their absolute best in researching, analysing, evaluating and suggesting lines of the greatest value and strength, thus allowing you to read the book and apply the lines in your own games with complete confidence.