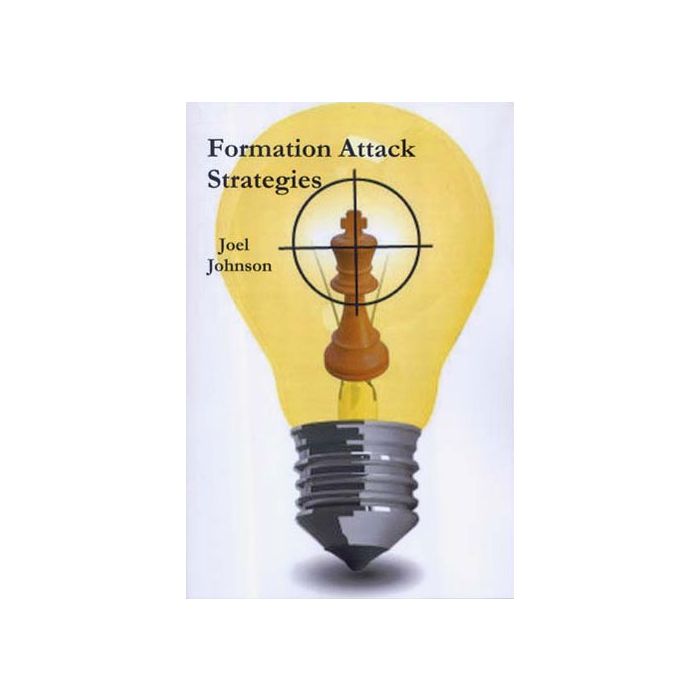 The much awaited sequel to the best selling book, “Formation Attacks”, has arrived. “Formation Attack Strategies” is another 500 page book, full of great attack information with 579 fabulous attack games from all openings and all eras.

The games provided in the book came from an in-depth global search for unique, inspirational, and original attacks from some of the world’s greatest attackers. Many of the them toil in remote areas of the planet and have only a local following.

Let me introduce you to attacking players like Guy West of Australia, Marc Esserman of Boston, MA, Liu Wenzhe of China, Kevin Seidler of Denver, CO, Manuel Bosboom of The Netherlands, Dharshan Kumaran of India, Padre Murphy of Ireland, to name a few.

The book also contains discussions about many attack philosophies, attack strategy and planning, identification and exploitation of weaknesses, and so much more. If you are one of the many people who love my last book, you will be ecstatic about “Formation Attack Strategies”.

Joel Johnson earned the National Master title in 1979 and later the Life Master title. Joel is a tactical chess player that has won many chess tournaments during his roughly thirty-five years of playing chess at Master Level. In 2007, he won the U.S. Senior Chess Championship. Joel was an award winning Editor of "Chess Horizons", the official state chess magazine for the state of Massachusetts and is a past Games Editor for the magazine.

Randall Hoch (USCF: 1891) - Texas:
"I am finding it as enjoyable as your first one. The games you have chosen are not only instructive, but also very entertaining. Your books have given me appreciation and motivation to play attacking chess from move 1. ... So I have to credit you with showing me the way!"

Michael Stewart (USCF: 2267) - Mississippi:
"I got your new book, outstanding work!!! Better than the first if that's possible. Both books are attacking classics and should be on every chess players shelf."

Ricky Kennedy, Chessville, on 'Formation Attacks':
"Full of heart, wisdom, aggression, – and, at 500 pages, is a seriously heavyweight contender. This title easily goes the distance, and those who read it and study with it are sure to come away with some champion-sized results."

Leonard McLaren, New Zealand Chess, on 'Formation Attacks':
“An entertaining instruction manual on attacking the king (..) many attacking brilliancies by the world's best players of the last 180 years (..) Johnson writes in a straightforward robust style."