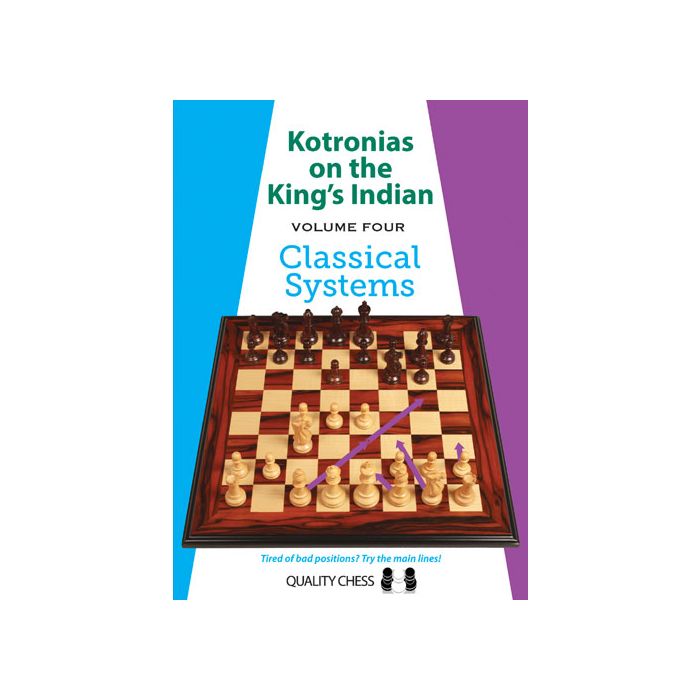 The King’s Indian Defence is one of Black’s most dynamic responses to 1.d4.

A favourite weapon of both Fischer and Kasparov, it remains a popular choice at all levels of play.

In this, the fourth volume of the epic Kotronias on the King’s Indian series, Grandmaster Vassilios Kotronias tackles a variety of White’s attempts to challenge his favourite opening, starting with the sequence 1.d4 Nf6 2.c4 g6 3.Nc3 Bg7 4.e4 d6.

The all-time greats Petrosian and Gligoric lend their names to systems examined after the further 5.Nf3 0–0 6.Be2 e5, with 7.d5 and 7.Be3 respectively, while the dreaded Exchange Variation 7.dxe5 is also discussed and dismantled.

Throughout the work, the author shares his considerable knowledge of typical positional motifs, while providing plenty of ammunition should the game erupt into the full-blooded warfare that is the hallmark of the King’s Indian.

A special selection of test positions is provided, enabling the reader to sharpen his tactical skills and improve his middlegame understanding.