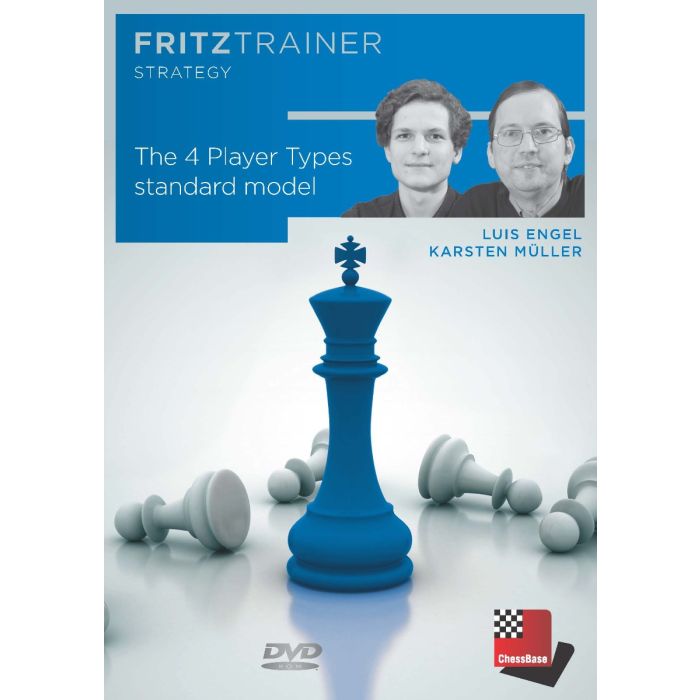 Find your strengths and weaknesses and those of your opponent

Playing styles in chess are an important and thus often discussed topic. GM Dr. Karsten Müller and GM Luis Engel take up a model by GM Lars Bo Hansen based on 4 player types – namely ‘activists’, ‘pragmatics’, ‘theoreticians’ and so-called ‘reflectors’. Their respective strengths and weaknesses are explained with the help of many examples, enabling the reader to try and assign himself or herself to one or the other player type.

“In the context of preparing for my next opponent ... certain character traits always play a role, which I try to assign to this player. ... Here it can be helpful and time-saving, for example, to draw conclusions about the type of player and thus also about strengths and weaknesses by (checking) played openings - or to get hints about the probability of (him or her choosing) certain opening variations by means of known player characteristics. These and numerous other considerations are bundled and systematically presented in this work. The division into four prototypical player natures is extremely helpful in answering questions that not only concern game preparation but also, for example, the determination of one’s own characteristics as a chess player. In addition, the work provides amateurs and chess enthusiasts with a helpful guide to form their own picture of this or that player.” (Excerpts from the foreword by GM Vincent Keymer)

Luis Engel, born in 2002, became a Grandmaster at the age of 17 and was German Champion in 2020 and won the German masters in 2021. He plays in the 1st Bundesliga for the Hamburger SK and is studying law.

Karsten Müller born 1970, has a world-wide reputation as one of the greatest endgame experts. He has, together with Frank Lamprecht, written a book on the subject: “Fundamental Chess Endings” in addition to other contributions such as his column on the ChessCafe and ChessBase websites and in ChessBase Magazine. Müller’s ChessBase-DVDs about endgames in Fritztrainer- Format are bestsellers. In the chessbase video portal he regularly welcomes top Grandmasters for his endgame show. The PhD in mathematics lives in Hamburg, where he has also played for the HSK in the Bundesliga for more than 25 years.