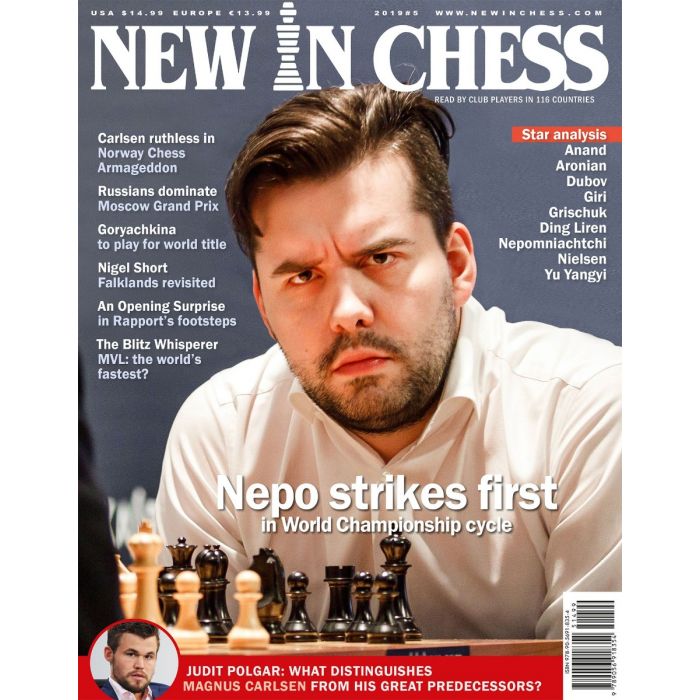 Thinking ahead and making plans while you’re cooking, why not?

While Garry Kasparov is about to make his debut as a Manga star, Bobby Fischer remains an inspiration, too. This time for a young Icelandic chess musician.

Bill Lombardy’s advice to a young and promising player to study the endgame didn’t fall on deaf ears.

In an undisguised attempt to fight draws and have more excitement, Altibox Norway Chess introduced a tiebreak system of Armageddon games. The Norwegian TV viewers loved the daily mayhem not in the last place because their hero Magnus Carlsen proved extremely efficient.

Courtney Love adores the horsey-shape piece that moves in an L shape.

42 Back to the Falklands

FIDE vice-president Nigel Short sincerely doubts whether Gens Una Sumus was high on their agenda when a group of Argentinian chess players secretly visited the Falklands.

With its walls draped in black and white, the Central Chess Club in Moscow was barely recognizable, but that did not stop the Russian participants to call the shots.

70 Shaking up the hierarchy

What distinguishes Magnus Carlsen from his great predecessors?

The World Champion won a barrel of whisky at the Lindores Abbey Chess Stars.

A far advanced rook pawn can be a considerable trump.

There are many ways to improve your play, but according to Matthew Sadler, studying the stars of our game remains a great recipe.

What was the best piece of advice Romain Edouard ever got?