A Complete Defense Against 1.e4
Authors
Alexander Chernin, Lev Alburt
Out of stock 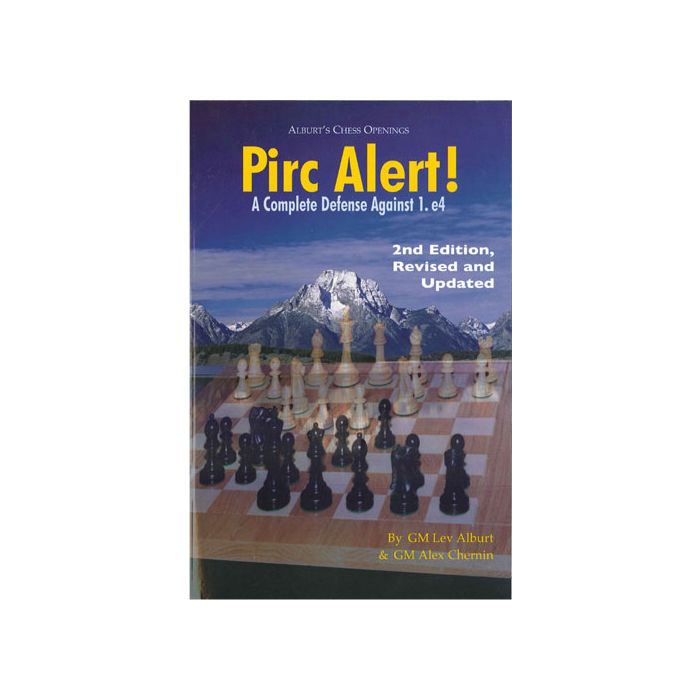 Every chess player needs a defense he can trust. Pirc Alert!  gives you a complete repertoire, everything you need to know to defend against White's most popular way of starting the game- 1.e4.

International Grandmasters Alburt and Chernin explain both the winning ideas as well as the theory and movers of the Pirc Defense, a dynamic system used by the world's chess elite.

Additionally, the merits of the Modern Defense, a related opening, are considered in every one of White's variations. Ideal for those who have other demands on their time, the Pirc rewards understanding its ideas over rote memorization.

Pirc Alert! is packed with surprise weapons. It gives you the most thorough explanation of an opening's themes and ideas ever published. Your whole approach to openings will  leap to a new level. You'll win more games and enjoy chess more.

Proven educational techniques make it easy for you to read and remember. The most important ideas and positions are set off in color. Lesson previews give you the context, and unique "Memory Markers" lock in what you've learned. And nearly 1000 diagrams often allow you to study without a board.

Eight years after the Pirc Alert! was first published, this revised and updated 2nd edition deals with the current theory  and has a no-secret-held-back approach of sharing unplayed theoretical novelties.

Grandmaster Alex Chernin is a world-championship candidate and the leading theoretician in the Pirc Defense. His ideas have brought the Pirc to the forefront of modern chess theory.

Grandmaster Lev Alburt, three times US Champion, former European Champion, and one of the world's most sought- after chess teachers, draws on his extensive experience to make this book easy to use for all players of all levels.

GM Glenn Flear, New In Chess Yearbook:
"[A] fun read even if the Pirc isn't your thing (..) For those who seek clarity in their train of thought, as well as thematic ideas and positional themes (rather than confusing labyrinths of variations), this book is for you.

It's a thick book, but not heavy reading at all (..) There is so much packed into the work that it's like two books in one, a 'Pirc Explained' followed by a 'Pirc Repertoire for Black'."

John Saunders, British Chess Magazine:
"An attractively presented work which includes a lot of ideas and suggestions from the two grandmasters."

John Watson, The Week In Chess:
"One of the best explanatory books on an opening ever written (..) The superb 'Themes and Ideas' section could be a book in itself; I find it easily the best example I have seen of this idea-based approach."

Hans Ree, NRC Handelsblad, January 22, 2010:
"Vladimir Kramnik won, against Jan Smeets, his first game [of the Corus 2010 tournament]. The opening book 'Pirc Alert' which he bought at a bookstall the day before the game, put him on the right track."