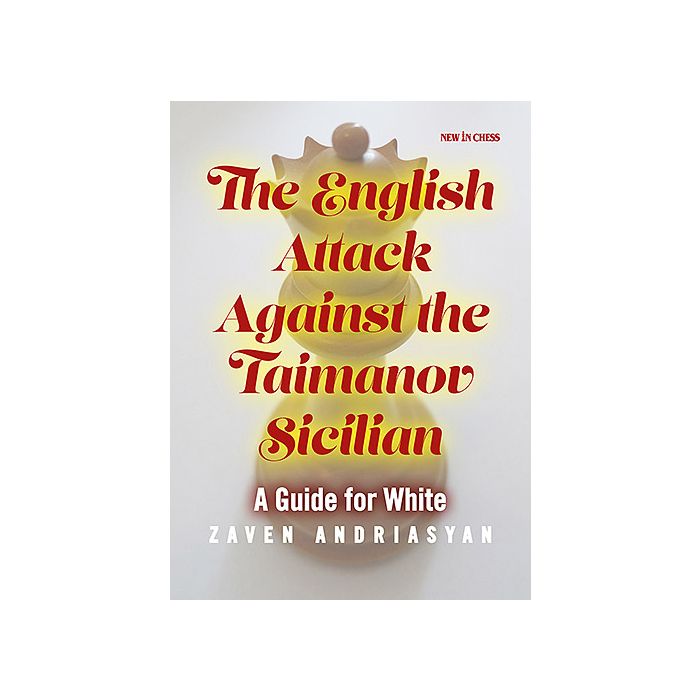 The Taimanov Sicilian is a chess opening widely played at club level and a favourite of elite players like Garry Kasparov, Vishy Anand and young star Anish Giri.

Against this variation, the ever popular English Attack has long been considered harmless, until in recent years some remarkable improvements were found for White. By castling queenside White creates exciting positions in which he has a dangerous initiative.

Armenian grandmaster Zaven Andriasyan has thoroughly and systematically investigated this unexplored chess opening territory. He unveils the structures behind the various lines and explains the plans and counterplans.

Andriasyan also presents a wealth of highly interesting new ideas and novelties, and provides the reader with 50 exercises.

Amateur chess players will find the English Attack to be an easy-to-grasp and dangerous weapon. Players at (grand-)master level will be delighted by the amount of valuable new information they will find.

Zaven Andriasyan (1989) was both European under-18 and World under-20 chess champion in 2006. He is currently one of the strongest grandmasters in Armenia. He is the author of the bestselling 'Winning with the Najdorf Sicilian' (2013).

CHESS Magazine:
"Still feels very modern, but is a system which has been around for a while now. The Armenian Grandmaster presents the ideas behind it."

GM David Smerdon, Chess.com:
"I find it particularly impressive that Andriasyan has done such a good job of covering [this variation] in what is quite a high-level product. The material is up to date and well analysed, adequately detailing (for the most part) critical sidelines and unplayed novelties as well as the more popular main lines (..) The explanation of the themes and motifs for both sides is definitely a huge plus."

B.Wilders, Nederlands Dagblad:
"Club players who have to play against this variation, or who wish to employ it themselves, receive systematic instruction, with fifty exercises (..) An excellent opening book."


IM Gary Lane, Chess Moves Magaizne:
"A good guide on how to beat the Sicilian."

Elburg Chess Reviews:
"Our young author leads you as guide through the labyrinths of variations and games, where all key positions are brought together instructively. So it is not difficult to take up this book."

GM Glenn Flear, author of 'Practical Endgame Play':
"As a rule, the notes are very dense, but that doesn’t stop the author giving the low-down on the strategy and plans. Another positive feature is the presence of a substantial conclusion to round-off each chapter, where the salient points are skilfully interpreted."

IM Sam Collins, Chess Today, on 'Winning with the Najdorf Sicilian':
“Andriasyan has an excellent writing style, entertaining and instructive. He makes the material much easier to digest and remember. One of the very best opening books I’ve ever seen.”

Adam Hunt, British Chess Magazine, on 'Winning with the Najdorf Sicilian':
"Excellently researched with some very interesting ideas and novelties along the way (..) There is also a chapter at the end on Najdorf exercises, which I enjoyed very much (..) It will become my new Najdorf reference and if you are serious about this opening I would recommend you get yourself a copy."