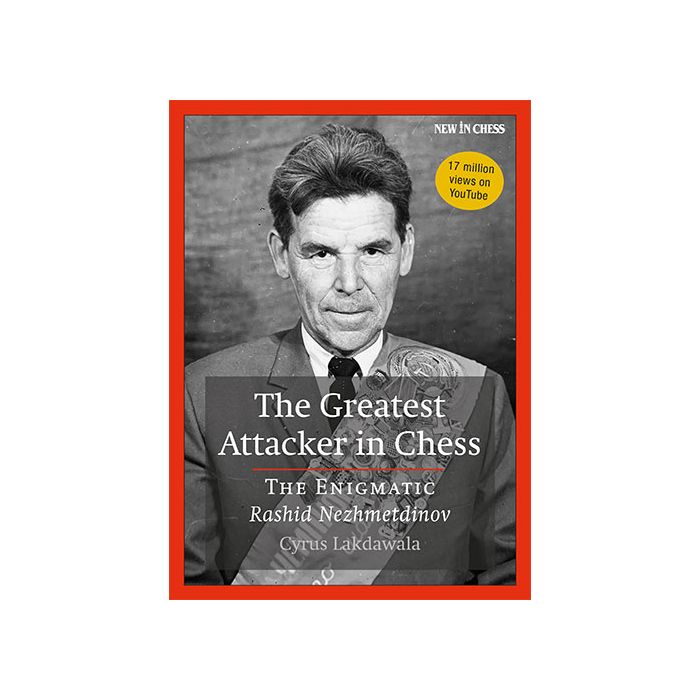 Rashid Nezhmetdinov (1912-1974) played fearless attacking chess. With his dazzling style, the Soviet master already was a legend during his lifetime, but international fame largely eluded him. Only once did he get permission to show his exceptional talent in a tournament abroad.

Five times Nezhmetdinov was chess champion of the Russian Federation. In the 1961 Soviet Championship, he won the ‘Best Game’ prize for a spectacular win against… Mikhail Tal who praised his opponent for his ‘amazing creativity.’ Other stars that ‘Nezh’ defeated in grand style included Spassky, Polugaevsky, Bronstein, and Geller.

His games, full of tactical pyrotechnics, are his legacy and have reached an ever-growing audience.  Nezhmetdinov’s shocking strategic queen sacrifice, in 1962 against Chernikov, as shown on Agadmator’s YouTube channel, has become the best-watched chess video of all time with millions of views.

In this book, Cyrus Lakdawala pays tribute to the genius of the enigmatic Nezhmetdinov, a Tatar who grew up as an orphan in the part of the Soviet Union that is now Kazakhstan. In more than one hundred impressive and instructive games and positions, Lakdawala shows how Nezhmetdinov fought for the initiative, how he bluffed and sacrificed, and how he kept his cool to out-calculate his opponents. Lakdawala’s lucid writing perfectly matches the power of ‘Nezh’s’ moves. This wonderful collection celebrates Nezhmetdinov as the Greatest Attacker in Chess.