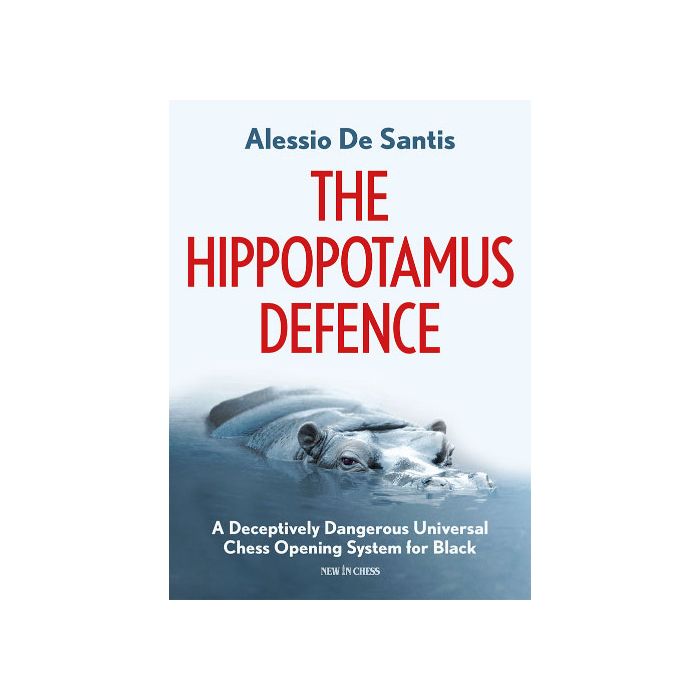 The Hippopotamus Defence is just what a club player needs. It’s a straightforward and clear-cut chess opening that avoids the ever growing body of mainline theory. It’s universal: Black can use the Hippo against virtually all of White’s choices (1.e4, 1.d4, 1.c4, 1.f4, the Colle, London, Trompowsky, Réti and others). It’s not very well known and will surprise many opponents.

On top of all that, the Hippo is seriously underestimated: with its characteristic double fianchetto it may look quiet, but inside there lurks a very dangerous animal. FIDE Master Alessio de Santis is one of the world’s greatest experts on the Hippo and has written a practical, well-structured and accessible manual.

His book can be studied on three levels: after a first flash of 3 to 4 hours you will be familiar with the Hippo’s basic moves and key variations, its strategic themes and recurring manoeuvres. In the second and third stage De Santis leads you through the most important concrete lines and introduces the Semi-Hippopotamus to counter some specific White ideas.

You can use the Hippo as a surprise weapon or as your main repertoire. The extensive explanations and clear conclusions make this book an easy-to-navigate manual for all club players. If you like to confront your opponents with some unexpected counter-attacks, then you need not look any further.

Alessio de Santis is a FIDE Master and one of the best known and most successful chess authors of Italy.

“This work was little short of a revelation. In advance of opening it up I was expecting something superficial, but once I delved into those murky waters where Hippos dwell, I was impressed by De Santis’s application. Just about all plausible structures that White may try are anticipated, examined and, consequently, appropriate antidotes are advised. De Santis really has come at his subject from all conceivable angles to leave no stone unturned. Did you know that the hippopotamus is the most dangerous of all large animals? In chess opening terms, I would argue that it’s also the case.” -- Grandmaster Glenn Flear, Yearbook 132

“Presents a very good view on the many ideas that the Hippopotamus offers. I very much like the author’s approach to work out the typical strategic and tactical themes that one will encounter as Black.” -- International Master Dirk Schuh, Rochade Europa Magazine