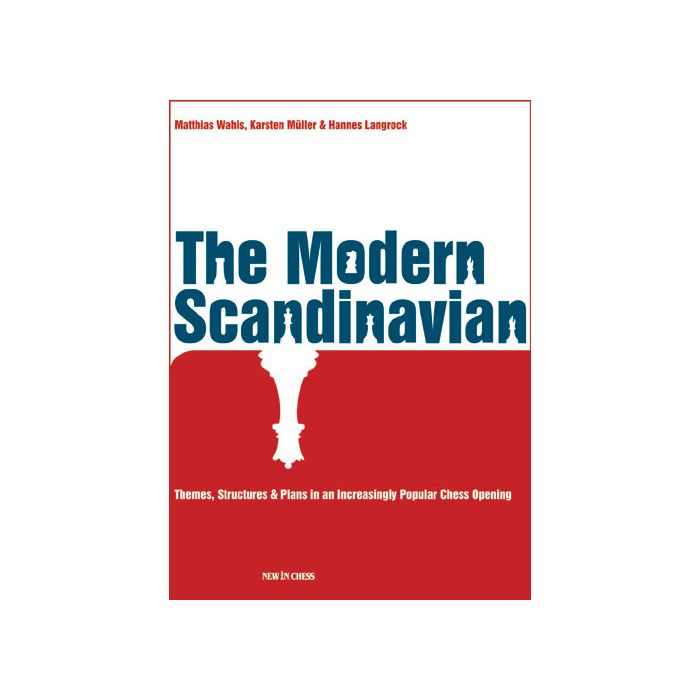 Matthias Wahls's "Modernes Skandinavisch 1" was a huge success when it was published in Germany in 1997. Wahls’s book contributed to the growing popularity of the Scandinavian (or Center Counter-) Defence as a solid weapon.

The Modern Scandinavian is an updated and expanded translation of ‘Modernes Skandinavisch 2’, which appeared in 2006 and also became a bestseller. This second book focuses not on theoretical lines but on the structural ideas after the moves 1.e4 d5 2.exd5 Qxd5 3.Nc3 Qa5.

• What are the basic ideas in the Scandinavian?
• How do pawn structures dictate plans of attack?
• Which tactical motifs can be expected in certain typical positions?

The original edition of The Modern Scandinavian has acquired cult status among chess aficionados. Some have even confessed to have learned German in order to be able to read it! This is no longer necessary, and this new edition will stand for many years, since it is about structures, not about the latest fashions.

Grandmaster Matthias Wahls was a German champion in 1996 and 1997. In his home country he has made a name for himself as a chess teacher.

Grandmaster Karsten Müller has gained a great reputation as a author. His "Fundamental Chess Endings" (with Frank Lamprecht) won the British Chess Federation Book of the Year Award, and more recently he published "Bobby Fischer: The Career and Complete Games of the American World Champion".

In 2007 Müller was voted "Chess Trainer of the Year" by the German Chess Federation.

Hannes Langrock is a successful International Master who in recent years has written many articles on openings. His first book, "The Modern Morra Gambit" appeared in 2006.

Marshtower Chess Reviews:
"It's an impressive work and it is clear that a lot of effort has been put in. Fans of 1.e4 d5 will find it required reading, but there is a lot more on offer than merely guiding the Scandinavian faithfull through their favourite opening; the middlegame wisdom imparted should be of interest to all practical players."

Joe Petrolito, Australasian Chess Magazine:
"Contains a concise repertoire for Black (..) very useful for players who are just taking up the defence (..) In all, the book contains an amazing amount of high-quality material, and is clearly a labour of love by the authors. It will be the definite book on this opening for a long time."

Richard Vedder, Schakers.info:
"The penultimate chapter consists of exercises, and the last chapter is a theoretical manual, suitable for quickly building up a repertoire."

Klaus Kreuzer, Europa Rochade Magazine:
"There is, without any exaggeration, no book nearly as good as this one (..) The 32-page Theoretical Appendix alone is probably more useful than many fat theory book!"

Bill McGeary, ChessVille:
"The authors take an approach that matches the spirit of the defense. Instead of separating material by move order or specific sequences, formations are used as refere