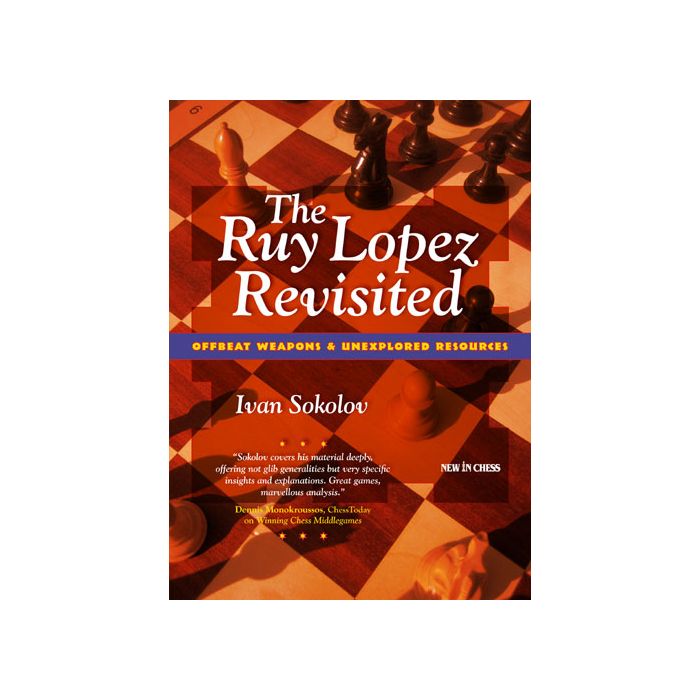 Vassily Ivanchuk played this gambit successfully against world champion Viswanathan Anand in the third round of the 4th Grand Slam Masters Final, held in Sao Paulo, in September 2011.

Ivan Sokolov:
"The Jaenisch should appeal to any black player who is looking for trouble at an early stage of the game. There are many dynamic ideas and still many lines to explore. I personally support Black's cause and I think the Jaenisch is a fully fledged variation."

The Ruy Lopez (or Spanish Opening) is one of the most important and oldest chess openings, forever popular with amateurs as well as professional players.

In this ground-breaking book, one of today’s greatest Ruy Lopez experts, Ivan Sokolov, presents a practical opening guide with a wide repertoire for black players who want to play for a win.

Besides the Jaenisch this book brings you:

The lines Sokolov presents are always dynamic and sometimes quite offbeat. But he has played most of them himself on numerous occasions, even against the strongest opponents.

Many of these lines turn out to be stronger than their reputation suggests, but Sokolov always remains an objective analyst. As well as numerous improvements for Black, the book also contains some crushing novelties for White!

Ivan Sokolov is a top grandmaster who was born in Bosnia in 1968. He was Yugoslav champion in 1988 and Dutch champion in 1995 and 1998. In his rich career Sokolov has beaten world chess champions like Garry Kasparov, Vladimir Kramnik as well as Viswanathan Anand.

Arne Moll, ChessVibes:
"This is simply a great opening book, probably one of the best ever on the Spanish Opening."

British Chess Magazine:
"A well-written, well-structured book with a lot of interesting ideas to explore. Sokolov introduces each chapter with plenty of textual material and also summarises at the end."

Pete Tamburro, Chess Life Magazine:
"With the line that Smyslov made famous, he devotes a decidedly simple and correct ten pages, and -voilà!- you have an understandable defense against the Ruy Lopez."


Fernando Offermann, Schachwelt:
"Sokolov's Spanish book with half-forgotten variations has something to offer for everyone (..) It is well suited for practical players, adventurers and connoisseurs."

Richard Vedder, Schakers.info:
"We must be grateful Ivan Sokolov wishes to share his knowledge of these variations with us, because he treats more or less everything Spanish where 3. ... a7-a6, 3. ...d7-d6 or that awful Berlin is not played."

Glenn Flear, Yearbook 94:
"Sokolov clears the cobwebs on lines that haven't received due attention and demonstrates that there are many w