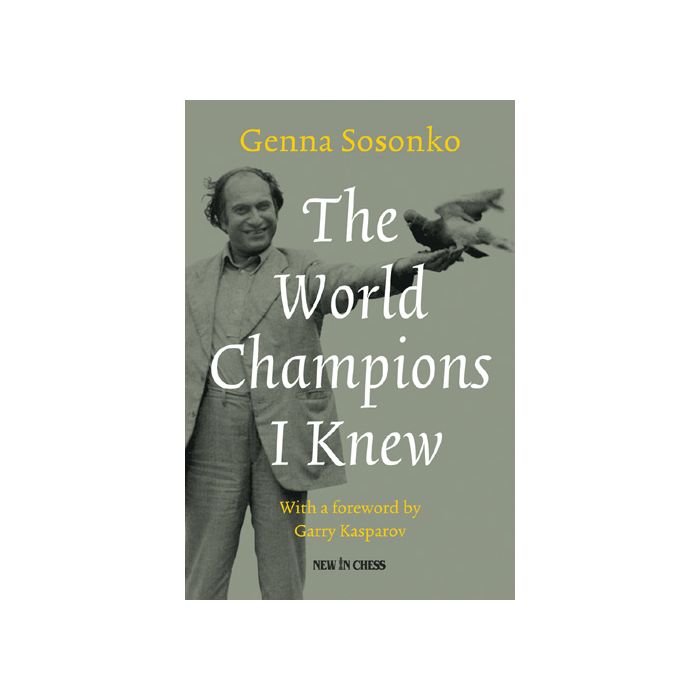 About / The World Champions I Knew

‘At the time Botvinnik was the personification of chess in the Soviet Union – river: Volga,
poet: Mayakovsky, goalkeeper: Yashin, chess player: Botvinnik. And suddenly – a kid with a name as short as a gunshot: Tal!’

Genna Sosonko’s riveting portrait of Mikhail Tal, the Magician from Riga who to this day mesmerizes chess fans all over the world, bears all the hallmarks of the author’s inimitable writing.

Few – if any – knew ‘Misha’ as well as his good friend and training partner. Here you see the real Tal: nonchalant genius, charming wit, womanizer, cult hero and drug addict. Mikhail Tal is only one of the chess greats that Sosonko brings to life in this collection of his best writings on World Champions.

Two of them lived before his time: his story of Alexander Alekhine is based on fresh research; his intriguing portrait of José Raúl Capablanca followed unforgettable encounters with Capa’s widow Olga.

Genna Sosonko got to know the other champions described here through his extensive travels as a chess pro. Countless hours of private conversation form the basis of his unique portraits of Max Euwe, Mikhail Botvinnik,Vasily Smyslov and Tigran Petrosian.

Genna Sosonko was born in Leningrad,where he was a leading chess trainer. Following his emigration from the Soviet Union in 1972 he settled in The Netherlands, later becoming a world class player. After his active career, he discovered a passion for writing that resulted in widely acclaimed books in which he masterfully combines an insider’s nostalgia with the detachment of a critical observer.

Garry Kasparov:
‘Sosonko brings genuine delight even to the most demanding readers, from professionals to amateurs or even non-players who are simply interested in chess history as a part of general human culture.’

Daniel King:
'Sosonko's portrait of Tal is no hagiography and is all the better for that. Beautifully written, heartfelt and moving.'

Jeremy Silman:
"If you love chess history, or history in general, or if you simply want to know more about some of your chess heroes, this book is a must buy. Beautifully written and rich with amazing content, I give Sosonko’s 'The World Champions I Knew' my highest recommendation."

Gary Lane, Chess Moves Magazine:
"A wonderful insight to the lives of the World Champions."

Max Euwe Center, Amsterdam:
"An important addition to what we know about the the lives of the world champions. This is chess literature at its very best."

John D. Warth, Chess Club of Southern Indiana:
"Sosonko writes with uncommon grace. His free-form stories speak from the heart, and frame each subject within the context of the times. There is wisdom in his open and honest assessments, and each world champion's story has been told with unusual warmth, insight, and compassion."