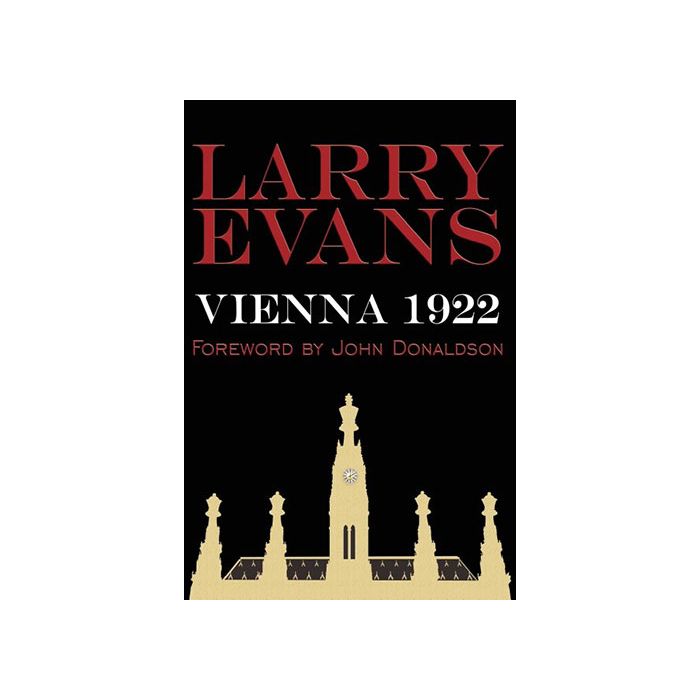 The First – and Sadly the Last – Book by Larry Evans.

Vienna 1922 is remembered as one of the first great tournaments after World War I.

All the stars of the day (Alekhine, Bogoljubow, Gruenfeld, Maroczy, Reti, Spielmann, Tarrasch and Tartakover) played except Capablanca and Lasker, but it was Akiba Rubinstein who was to turn in an outstanding success scoring an undefeated 11½ from 14 to finish a point and half ahead of second place Tartakover and two and a half(!) points ahead of Alekhine.

This was the first book ever written by American grandmaster Larry Evans. The then 16-year-old master self-published it in 1948 with English descriptive notation, no diagrams, with a plastic ring binding, mimeographed.

He was persuaded to revise and update it, making use of modern figurine algebraic notation, many diagrams, not to mention annotations that have made him one of the most popular chess writers of our era.

Just when this book was being prepared to go to press, however, the tragic news flashed around the world: Larry Evans had died. As far as chess in America was concerned, he had been a national treasure. But his loss was not felt only in the U.S.

He was admired as a chessplayer, journalist and author worldwide.

As noted by John Donaldson in his Foreword, this book marked the beginning of what turned out to be one of the longest and most productive literary careers in American chess history. It also tragically turned out to be Larry's swan song.

It is unlikely that the chess world will ever see another chessplayer who accomplished so much both with the pieces and with the pen.

Al Lawrence, Chess Life:
"All at once a remarkable chess book at a reasonabel price, an important memorial to past glory, and the alpha and omega of one of our finest writers."