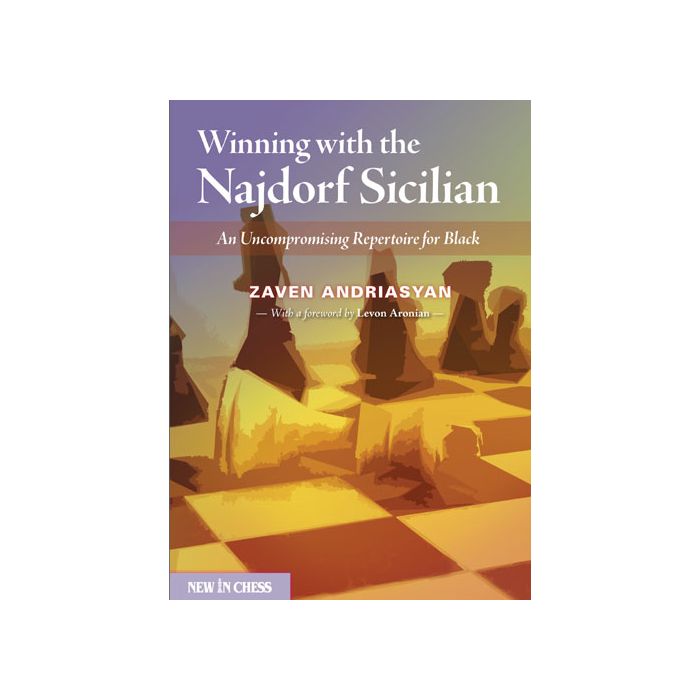 The Najdorf Variation of the Sicilian Defence continues to be extremely popular. Advocated by great fighting champions like Garry Kasparov and Bobby Fischer, this flexible, wonderfully rich system offers one of the best ways for Black to play for a win.

Young Armenian grandmaster Zaven Andriasyan has developed and successfully employed  his very own attacking repertoire for Black in the Najdorf.

In this book he points out ways to avoid the most dangerous white systems, such as the English Attack, and presents ideas for Black to fight for the initiative right from the start.

Revisiting all major Najdorf battlegrounds, Andriasyan challenges accepted views and sheds new light on this great opening. In his search for new paths he has found a great number of radical improvements, resulting in a complete, surprising and punchy repertoire.

After you have read and studied Winning with the Najdorf Sicilian, you will be ready and happy to take on 1.e4 players at all times!

With a foreword by Levon Aronian.

Zaven Andriasyan (1989) was both European under-18 and World under-20 champion in 2006. He is currently one of the strongest grandmasters in Armenia. Zaven Andriasyan regularly writes for the New In Chess Yearbooks.

Sam Collins, Chess Today:
"Andriasyan has an excellent writing style (..) He often interrupts dry analysis with explanations about which pieces to trade, why he likes certain manoeuvres and dislikes others. This is all entertaining and instructive and makes the material much easier to digest and remember. His line selection is also excellent, frequently giving a choice for Black but always explaining why he prefers the variations he recommends (..) One of the very best opening books I've ever seen."

Dennis Monokroussos, The Chess Mind:
"I learned new things not only for Black, which is what you'd expect, but for White too. He is very even-handed, and quite regularly shows a main line for Black that has troubles, so that he can better motivate and explain his preferred line. That makes this an even more valuable resource - it's a good source of ideas for the first player too."

"Excellently researched with some very interesting ideas and novelties along the way (..) There is also a chapter at the end on Najdorf exercises, which I enjoyed very much (..) It will become my new Najdorf reference and if you are serious about this opening I would recommend you get yourself a copy."

Max Euwe Center, Amsterdam:
"All variations of the Najdorf are being treated and the objective is for Black to be the first to deviate from the main lines (..) Andriasyan concludes that the Najdorf is the best way for Black to play for a win."

"Andriasyan advocates a sharp but rather narrow repertoire for Black to play for a win (..) Within that repertoire he presents comprehensive analyis with various tips and tricks (..) White players, as well, can pick up a few things as well."

Dr W.Schweizer, Rochade Europa Magazine:
"Although the author has structured his work as a repertoire book for Black, he alwa

Sveshnikov vs. the Anti-Sicilians