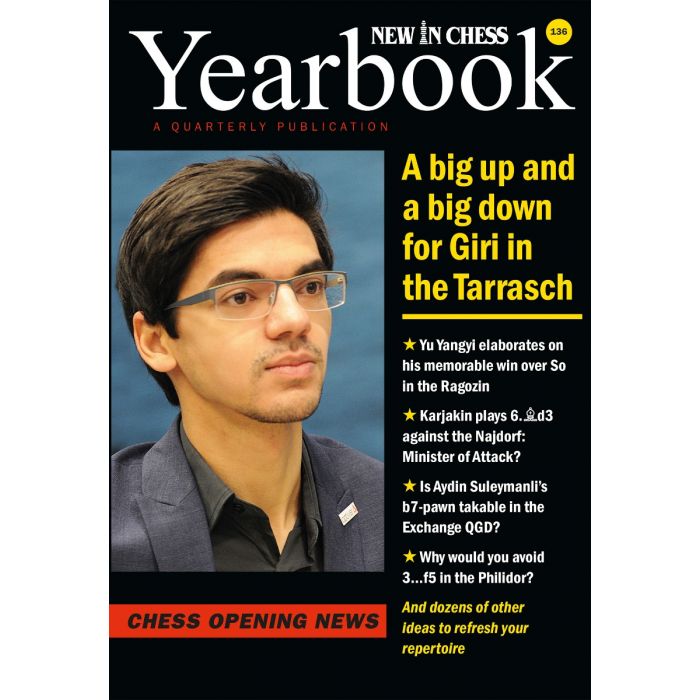 Forum
Like many Surveys in Yearbook 136, the Forum Section also shows that even in these difficult times we won’t be deprived of opening novelties. Han Schut and René Olthof provide snapshots of a novelty in the 4.d3 Berlin and a quite shocking blunder respectively, both by Magnus Carlsen. Regular contributor and Dragon fan Wayne Gradl comes up with an attack as Black in the Nimzo-Indian, played in an email game by himself, and Rafal Ogiewka continues to bombard us with his amazing discoveries.

From Our Own Correspondent
Erwin l’Ami, our columnist on correspondence chess, got carried away by a King’s Gambit he saw, resulting in ‘a full overview on this fantastic opening’ – 21st century style, of course. This column also features a deep analysis by guest contributor GM Krishnan Sasikiran, who has grown to be a prominent correspondence player, of a completely new idea in the Zaitsev line (the famous 9…e3 from the 1987 Kasparov-Karpov match) of the Reversed Sicilian.

ReviewsGlenn Flear reviews three books and two DVD’s. The English GM was surprised by the many creative findings by Semko Semkov in his book The Modern Triangle, and also by Daniel Hausrath’s debut Double Fianchetto, which offers a ‘lifestyle change’ involving a minimum of memory work. Ilya Odessky’s Winning Quickly with 1.b3 and 1…b6 is bewildering, strangely organized, but ‘tremendous fun’! The two DVD’s Flear reviews are by top theoreticians: Erwin l’Ami’s The Benko Gambit Explained and Rustam Kasimdzhanov’s The Benoni is back in business.