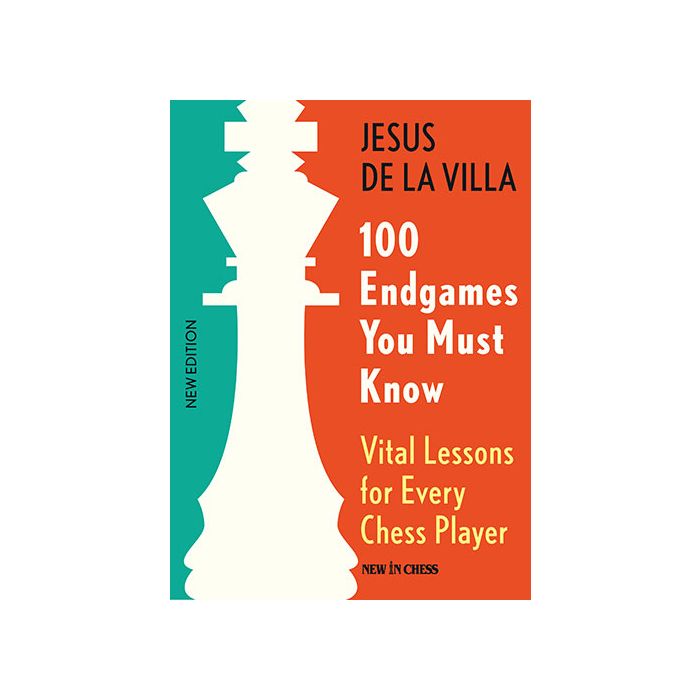 The good news about endgames is:

The bad news is that, all the same, the endgame technique of most players is deficient. Modern time-controls make matters worse: there is simply not enough time to delve deep into the position.

Jesus de la Vila debunks the myth that endgame theory is complex and he teaches you to steer the game into a position you are familiar with.

This book contains only those endgames that:

Your performance will improve dramatically because this book brings you:

Jesus de la Villa (1958) is an International Grandmaster born in Spain. He is a successful author and a well-known chess coach. He has won the Spanish Championship twice.

Shortlisted for The Guardian Chess Book of the Year Award

Gary Walters Chess:
"If you really have no patience for endgames, at least read Jesus de la Villa's '100 Endgames You Must Know'."

Marsh Towers Chess Reviews:
"The greatest strength of the book: breaking things down into well-worded chunks of easily digestible information."

GM Matthew Sadler, former British Champion:
"There’s not much to say about it, ­you just have to buy it and read it! De la Villa does a truly wonderful job of explaining useful endgames in a calm and measured manner that is clear enough for any strength of player to understand while still being interesting for stronger players. If you’ve never read an endgame book before, this is the one you should start with."

Elisabeth Vicary, USCF Online:
"[Former Women World Champion Alexandra Kosteniuk] said she had really enjoyed De la Villa's '100 Endgames You Must Know' and had made flashcards out of the 100 positions. One side of the card had the position, the solution was written out on the reverse, and she quizzed herself until she knew all 100."

IM John Donaldson, jeremysilman.com:
"De la Villa does the job quite well. He emphasizes the practical and prefers understanding to memorization."

British Chess Magazine:
"A clear exposition of the most important endgames, with exercises to test your knowledge."

Max Euwe Centre, Amsterdam:
"The instructional explanations, the many diagrams and the pleasant presentation make this endgame book an interesting publication for club players with a rating from 1600."

GM Niclas Huschenbedt:
"My favourite endgame book, very clear and concise. If you only read one endgame book it should be this one."