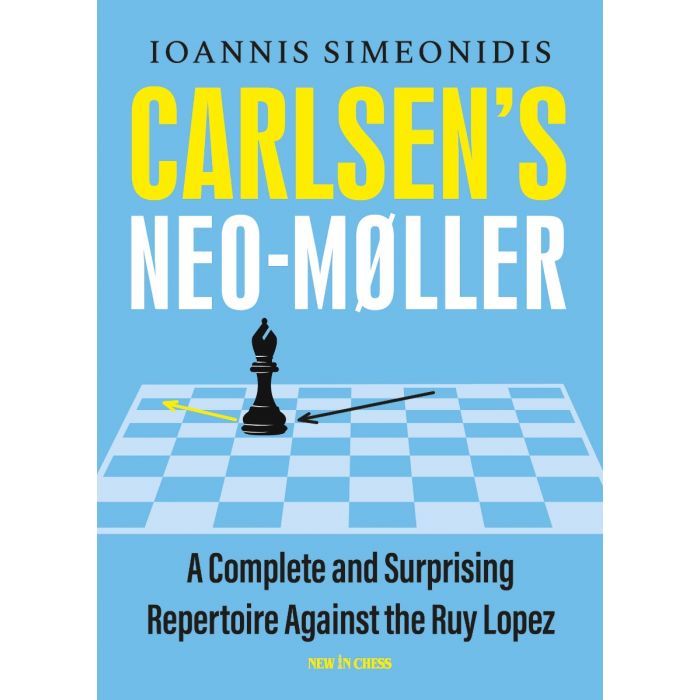 The Ruy Lopez is one of the most important chess openings, hugely popular with amateurs and masters alike. Black players allowing the Ruy Lopez main lines are usually condemned to passivity, defending a slightly worse (though solid) position for as long as White chooses this situation to continue.

World Champion Magnus Carlsen doesn’t like passivity. He likes unconventional and active systems that allow him to take command and put pressure on his opponent from early on.

That’s why Magnus Carlsen revolutionized the old Møller Attack, one of the sharpest and most uncompromising variations against the Ruy Lopez. As yet largely disregarded and unexplored by the majority of players, Carlsen’s new approach allows Black to break free early and start giving White a hard time.

FIDE Master Ioannis Simeonidis is the first to investigate this system, cover it in detail, and make it easy to grasp for club players. He has called it the Neo-Møller. Simeonidis has made lots of exciting discoveries, presents many new ideas and shows that it is a reliable and playable system.

Since the Neo-Møller is a very early deviation from the main lines, it’s easy for Black to actually get it on the board and take opponents out of their comfort zone. Simeonidis has created a compact, accessible and inspirational book. One thing looks certain: White players of the Ruy Lopez are going to thoroughly dislike the Neo-Møller!

Ioannis Simeonidis (1975) is a Greek FIDE Master and FIDE Trainer. He is a contributor to New In Chess Yearbook, the world’s leading publication on chess opening news. Simeonidis is the inventor of a recent new system in the Sicilian (the line 2.Nc3 d6 3.d4!?), also played by Magnus Carlsen.

“Ioannis Simeonidis has woven a repertoire based on a virtually brand new way to meet the Spanish Opening. The fact that it has Carlsen’s seal of approval should in itself make the potential readership already sit up and pay attention, and that’s even before we get delving into the details. It’s complete because the Greek author seems to have thought through, and prepared answers to, all the evident ways for White to react. It’s also surprising, as play often veers off into unknown territory in quite a startling manner. It’s rare that any monograph displays what’s in store so lucidly. The chapters themselves, each demonstrating how to meet each of White’s main attempts, are short but to the point. They involve one illustrative game, with detailed notes, plus an intro and a conclusion. One of the most original works on the Spanish/Ruy Lopez that I’ve seen for years and an excellent choice for all levels.”
GM Glenn Flear, Yearbook 138

“A good book particularly for Black players, who will be able to surprise White players that failed to buy this work. Every variation is being expertly explained and at the end of every chapter there are practical conclusions.”
Bab Wilders, Nederlands Dagblad

“The author has taken pains to make the book as user-friendly as possible for club players, but there is no getting around the fact that the play can be very forcing and, in some cases, Black needs to memorize concrete variations.”
IM John Donaldson

“You play 1.e4 e5 but are always afraid of the Ruy Lopez? Worry no more. Carlsen's Neo Moeller is just great.The opening and the book. Simeonidis manages to deal with all questions concisely and convincingly and has also added exercsie to test your new knowledge immediately. Join the World Champion in his fight against the Ruy Lopez!”
GM Karsten Müller