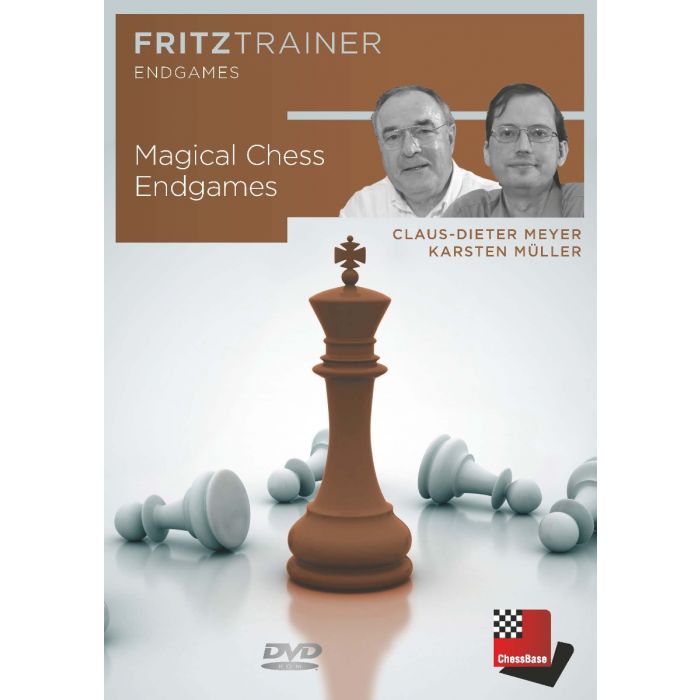 The third and final DVD of the two authors is all about Karsten Müller’s special field: the endgame. Claus-Dieter Meyer has put under the microscope many fascinating examples, making some most surprising discoveries.

This rich treasure trove forms the basis of Karsten Müller’s video presentation on the DVD: in over 4 hours in front of the camera, the Hamburg grandmaster presents to you sensations from the world of endgames - partly reaching far beyond standard techniques and rules of thumb - and rounds off with some cases of with own examples.

The following themes are featured: mate, stalemate, the sharpest endgame weapon zugzwang, the correct exchange to make and different coloured bishops, as well as rook endgames with sections on umbrella, checking distance and Vancura’s draw (pure form and more complex cases). This is training at its best: you can first study endgame technique on video and afterwards deepen your knowledge by solving concrete interactive exercises!  Let the magic work on you!

Dr. Karsten Müller, born 1970, has a world-wide reputation as one of the greatest endgame experts. He has, together with Frank Lamprecht written a book on the subject: “Basics of chess endgames” in addition to other contributions such as his columns on the website ChessCafe as well as in Chess- Base Magazine. M.’s ChessBase-DVDs about endgames in Fritztrainer-Format are bestsellers.

A profound chess analyst through and through, FIDE master Claus-Dieter Meyer (1946-2020) was one of the most experienced German A-trainers and for many years a full time employee of the chess club SV Werder Bremen. He authored numerous publications, including “The Magic of Chess Tactics“ Volumes 1 and 2 with Karsten Müller. He was also known for his analysis column to be found at www.werder-schach.de.