Masterpieces and Dramas of the Soviet Championships: Volume II

Masterpieces and Dramas of the Soviet Championships: Volume II 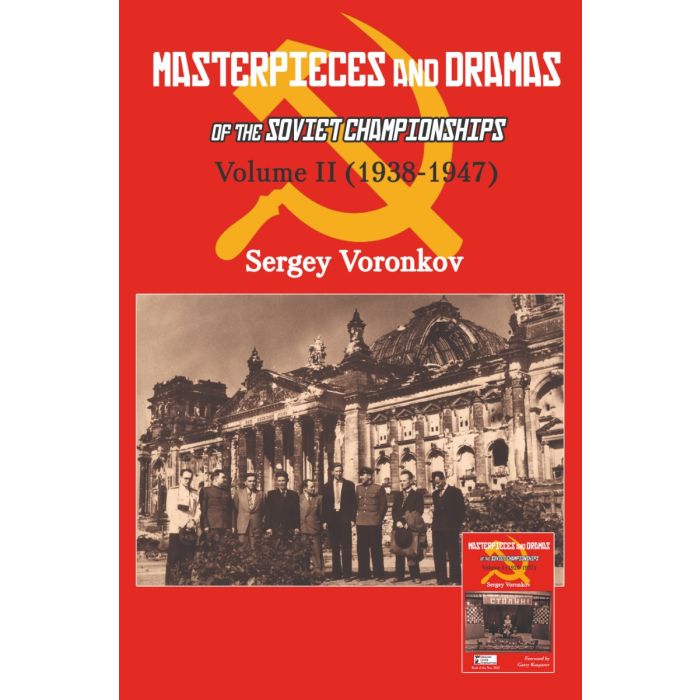 The second part of Sergey Voronkov’s three-volume treatise continues from where Volume I left off. It covers the eleventh to fifteenth Soviet championships, the 1941 match tournament for the title of Soviet Absolute Champion, and the main events in the country’s chess history between these tournaments. Themes include the downfall of Nikolai Krylenko, the persecution and disappearance of Soviet chess players during the purges, and the experience of chess players in World War Two. The atmosphere of the time is captured in contemporary accounts and memoirs of key players and cultural figures.

We see Botvinnik and Keres established as leading challengers for Alekhine’s throne, with plans being made to arrange a title match. We encounter for the first time and witness the rise of great Soviet players such as Smyslov, Bronstein and Boleslavsky, and enjoy the games of many other stars including Flohr, Lilienthal, Bondarevsky, Kotov and Tolush.

This volume contains 84 games and fragments mostly annotated by the players themselves and their peers, and subjected to recent computer analysis. It is illustrated with around 250 photos and cartoons from the period, the main sources being Russian chess magazines and tournament bulletins.

Volume I of Masterpieces and Dramas of the Soviet Championships was named the English Chess Federation’s Book of the Year 2021. The jury stated: “The book reads like a novel… A most remarkable, absorbing and entertaining chess history which fully lives up to its title, Masterpieces and Dramas, on and off the board. A worthy winner of Book of the Year 2021 over strong competition.”

Victor Kupreichik: The Maestro from Minsk

I was a Victim of Bobby Fischer