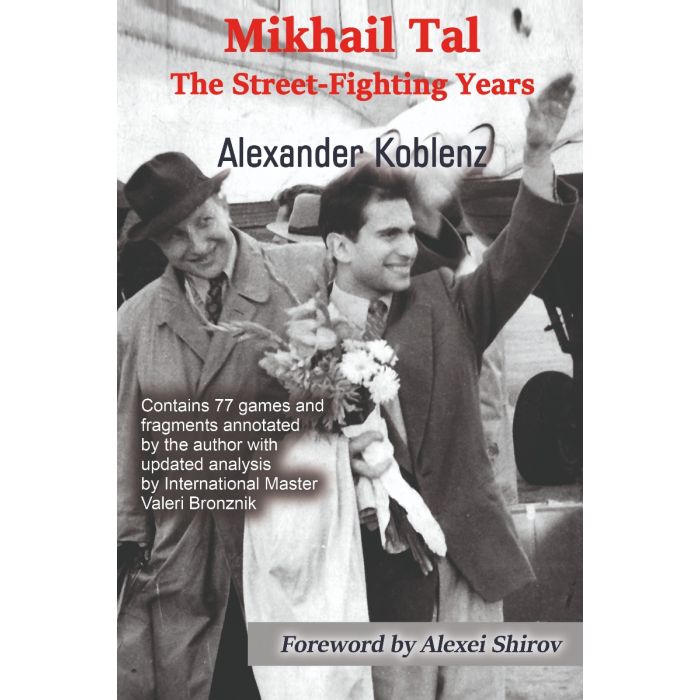 In Mikhail Tal: The Street-Fighting Years, Tal’s long-term coach and
second Alexander Koblenz takes the reader through the first 12 years
of Tal’s chess career, from promising junior to world champion in 1960
and encompassing his return world championship match against Mikhail
Botvinnik in 1961.

This classic book, first published in the Soviet Union in 1963,
contains 77 games and fragments annotated by the author who provides
ring-side commentary and unique inside knowledge, as well as
background information to the games and anecdotes.

Five of the games are taken from Tal’s 1960 world title match and
seven from his 1961 world title match. Aside from Botvinnik, opponents
include Bobby Fischer, Vasily Smyslov, Tigran Petrosian, Boris
Spassky, David Bronstein, Viktor Korchnoi, Paul Keres, Efim Geller,
Yuri Averbakh and many other stars of chess during the 1950s and early
1960s.

The analysis has been updated using the latest computer technology by
International Master Valeri Bronznik. Bronznik delivers a masterclass
in modern analysis of classical games while allowing Koblenz full
scope to demonstrate how Tal destroyed his opponents with the best
attacking chess known at the time. Indeed, Bronznik makes many new and
exciting discoveries in Tal’s games and this work serves as an
instruction manual for playing practical, street-fighting chess.

As Alexei Shirov writes in his foreword, “I am very happy that this
old but highly instructive book is finally out in English. The old
Russian edition has always been a special treasure for me and I truly
enjoyed reading it through again.”

Alexander Koblenz (1916-1993) was chess champion of Latvia four times
in the 1940s, competed in the final of the Soviet championships in
1945, won a number of Latvian and international tournaments, and
qualified for the USSR Master of Sports title, also in 1945. According
to Chessmetrics he was the world number 43 in July 1945. He coached
Mikhail Tal permanently over 16 years and seconded him in his two
world title matches against Mikhail Botvinnik (1960 and 1961). Koblenz
wrote 20 books on chess in his lifetime. He was also a leading chess
organizer and journalist in Latvia.