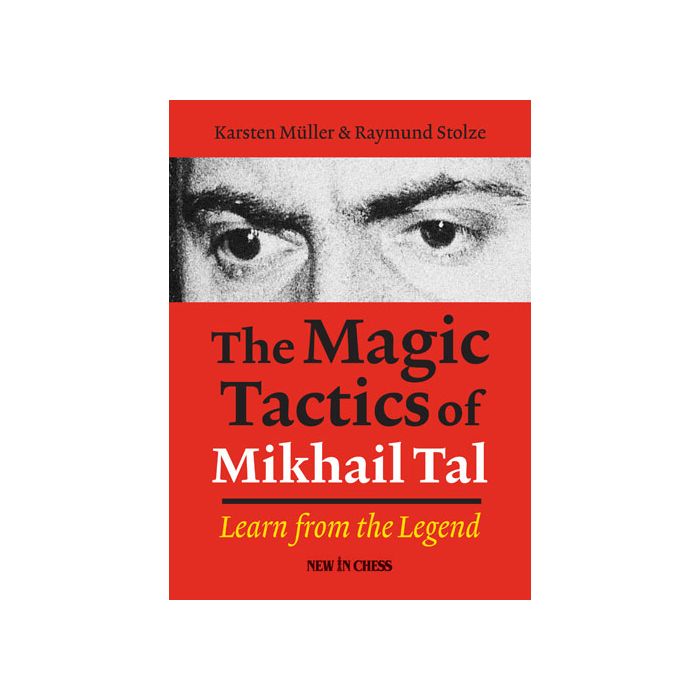 "You must lead your opponent into a deep, dark forest, where 2 + 2 = 5 and where the path back out is only broad enough for one of you." --Mikhail Tal

Mikhail Tal was one of the greatest geniuses in chess history. Feared and admired for his dazzling attacks, the ‘Magician from Riga’ took the chess world by storm. In 1960, at the age of twenty-three, he wrested the world title from Mikhail Botvinnik to become the youngest World Champion ever.

In this book Karsten Müller and Raymund Stolze have created an instructional guide by investigating and explaining the secrets of Tal’s breathtaking tactics. Additionally, they present one hundred exercises selected from his games that will teach amateurs how to distinguish between correct and incorrect combinations, and how to defend against them.

A special feature are the contributions from legendary grandmasters such as Spassky, Yusupuv and Kramnik, who share their personal impressions and describe their games with the 8th World Champion.

The result is both an intimate portrait of one of the all-time greats of chess and an instructive guide for lovers of Tal’s legendary combinational style.

Karsten Müller (1970) is a mathematician and a chess grandmaster from Hamburg. He is a prolific writer whose books include the bestselling 'Bobby Fischer: Career and Complete Games' and 'The Modern Scandinavian'. Raymund Stolze (1945) is a chess trainer and journalist who lives in Berlin.

Martin Rieger, Rochade Europa:
“I am really thrilled by this book, everything is spot-on.”

Michael McGuerty, ChessCafe:
"There is much to be enjoyed and years of training material provided. The pen portraits are icing on the cake content-wise and will bring a fresh perspective for many readers who will feel as if they have come to know Tal on a more personal level."

KARL Magazine:
“Exceptional, instructive and entertaining. Definitely a milestone in the various publications about Mikhail Tal.”

Peter Doggers, ChessVibes:
"A combination of biography and tactics manual, and this makes it quite interesting indeed (..) A very special book, both very instructive and enjoyable for all generations of chess players."

British Chess Magazine:
"Impressive and advanced. There are many books on Tal, but this scales new heights."

Andrew Farthing, Chess Moves Magazine:
"A splendid production, with deep analysis and copious 'colour' in the form of background to the specific positions chosen and reflections on Tal by some fifteen players who knew and played him."

Sean Marsh, CHESS Magazine:
"This wonderful book deserves to reach a wide audience (..) The best book on Tal since his own 'Life and Games'."

John D.Warth, Chess Club of Southern Indiana:
"What emerges from these pages is the soul of Tal's genius (..) This is an important work whether you read it for its inspirational tactics or to gain insight into the life of one the game's greatest artists."

The Judges of the English Chess Federation Book of the Year Award:
"The spell Tal cast on the chess world in his early years by his passion for the game is well captured. For a new