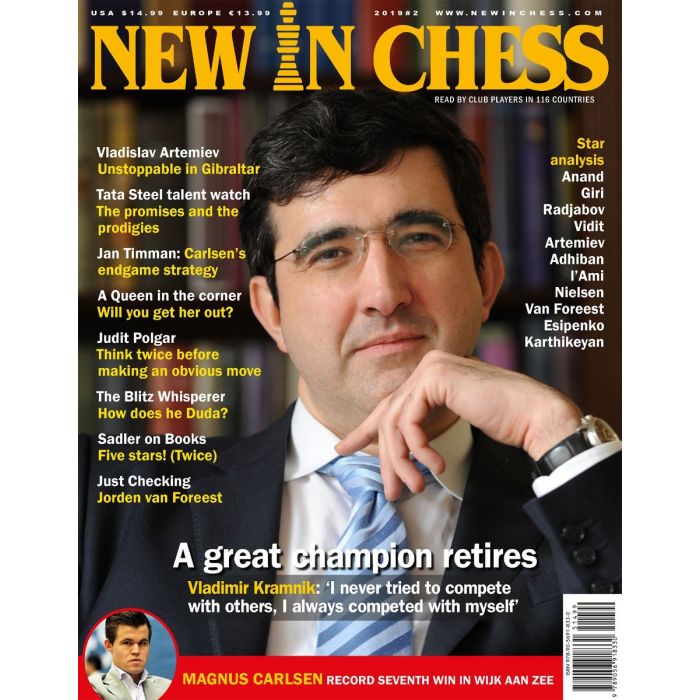 DeepMind’s interest in both chess and go is nothing new. Emanuel Lasker was also fascinated by the ancient Chinese game.

How much did Lisa Lane get for her signed copy of the first ever issue of Sports Illustrated  with a chess player on the cover? And can chess pieces ward off evil spirits?

What happened to Nigel Short’s column? And was Samuel Reshevsky really such an obnoxious opponent?

Ever since his stunning debut way back in 2004, when as a 13-year-old kid he made his first GM norm, Magnus Carlsen has had warm ties with Wijk aan Zee. At the end of the 81st Tata Steel tournament, the Norwegian phenomenon lifted the winner’s trophy for a record seventh time.

Donner on chess as an educational tool and more.

The news of his retirement from professional chess elicited reactions of shock, sympathy and admiration. An apt moment to look back.

The Tata Steel Challengers is an ideal launch pad for future champions. What about his year’s crop?

62 Surprises by the Dutch seaside

When your next move looks forced or automatic, it may be useful to think twice.

As the top seeds faltered and fell by the wayside, a rising tide of promising youngsters dominated the Gibraltar Chess Festival. Vladislav Artemiev (20) won seven games and went straight for first place.

Cornered queens: assets to be happy about or liabilities to worry about?

Maxim Dlugy takes a closer look at the speed chess qualities of Jan-Krzysztof Duda after the Polish youngster finished second at the Blitz World Championship.

102 Waiting for a mistake