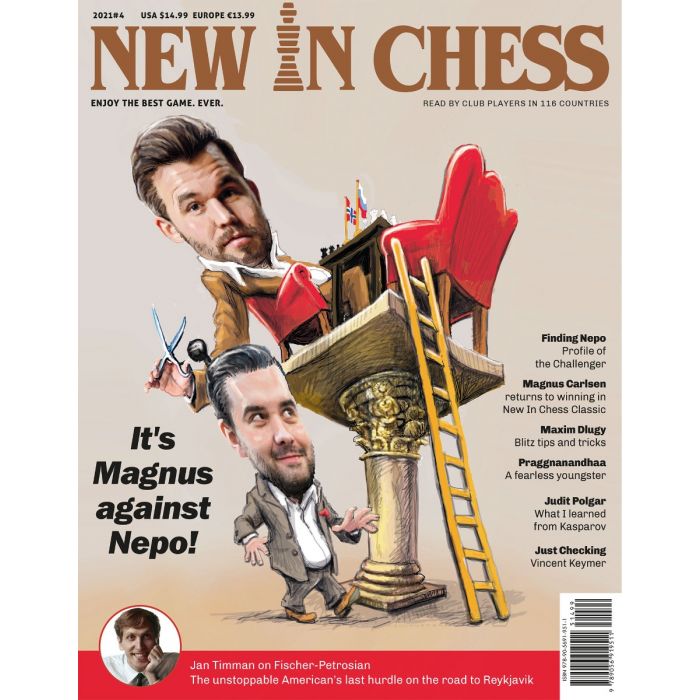 6 The Chess Police
Cops in Pittsburgh are fostering a better relationship with the public they serve simply by sitting down to play chess with them.

8 NIC’s Café
Finally we find out the real origins of Batman’s strategic mastery.

10 The wait is over
After 400 long days Ian Nepomniachtchi won the Candidates tournament in Yekaterinburg. The tension that had built up for so many months, was essentially released in a week, as ‘Nepo’ only needed five games to become Magnus Carlsen’s next Challenger.

46 Nineteen Forever
Jan Timman describes the preamble to Bobby Fischer’s Candidates match against Tigran Petrosian in 1971 and analyses the first game that took the American’s winning streak to an incredible 19 games.

54 Carlsen ends 6-month drought
His last tournament win dated back to last October. The Norwegian finally shook off his discontent and frustration as he clinched the New In Chess Classic, beating old rival Hikaru Nakamura in the final.

59 Champion rating Champions
Magnus Carlsen awards points to the World Champions starting from Fischer (and including himself!) for ‘genius’, ‘entertainment’, ‘influence’ and ‘sanity’(!).

74 Judit Polgar on Kasparov
The opening and middlegame play of the 13th World Champion are rightly famous, but let’s not forget about his endgame virtuosity either.

79 What would you play?
Test your decision-making skills with Thomas ‘Toolbox’ Willemze.

84 The Magnus challenge
Maxim Dlugy looks at the lessons that can be learned from the blitz marathon the World Champion played against 19 of the best juniors in the world.

93 They are the Champions
Amir Zaibi is the national champion of Tunisia.

94 Sadler on Books
Why would we waste time going over stuff we already ‘know’? Because chess knowledge is trainable!

106 Just Checking
Which three people would Vincent Keymer like to invite for dinner?