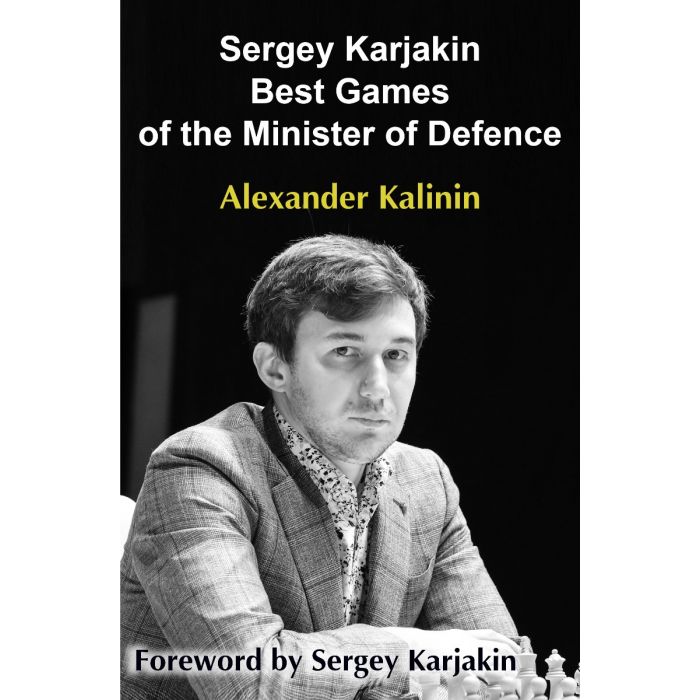 Sergey Karjakin has consistently been one of the strongest chess players of the early 21st century. World U12 Chess Champion in 2001. The world’s youngest ever grandmaster at the age of 12 in 2003. World Rapid Chess Champion in 2012. World Chess Championship Challenger in 2016, drawing 6-6 in the classical games and just one game away from winning the chess crown from Magnus Carlsen. World Blitz Chess Champion in 2016. Tied for 2nd-3rd place in the 2018 Candidates Tournament.

This best games collection begins with a biographical chapter, discussing the Russian grandmaster’s rise from early childhood to the chess elite. It contains 66 fully annotated games and 9 fragments, illustrating the distinctive feature of Karjakin’s style: a harmonious blend of subtle positional understanding and an acute sense of dynamics.
50 of the games are grouped according to learning themes: direct attack on the king; attack in the center and on the queenside; combined attack on both flanks; opening wins; symmetrical pawn structure in the center; positional sacrifice; defence and counter-attack; and endgames.

The author is a grandmaster and Distinguished Coach of the Russian Federation.

Sergey Karjakin wrote in his foreword: “The annotations are captivating and not overloaded with computer variations; instead, the author provides practical explanations so that the reader can use this games collection to study all three stages of the chess game.”

Alexander Kalinin, born in 1968 near Moscow, Russia, is a Grandmaster and a distinguished chess trainer. He has coached Daniel Naroditsky (USA) to win the World Youth Championship, European and Russian Women's Champion Grandmaster Valentina Gunina and Olympiad gold medal winner Women’s Grandmaster Olga Girya, among many others. He has previously written a number of books in English and Russian, including on Fabiano Caruana, the Slow Italian Opening, the French Defence, the King’s Indian Defence, the Sicilian Defence and chess learning methods. He has regularly commentated at the annual Moscow Open. Tournament successes include Champion of the Moscow Military Region (1987), and outright or shared winner of a number of international tournaments – Purmerend (Netherlands, 1993), Haarlem (Netherlands, 1993,1994 and1995), Wijk aan Zee master’s tournament, 1996), Leiden (Netherlands, 1997), North Bay (Canada, 1999), and Springfield (USA, 2001).