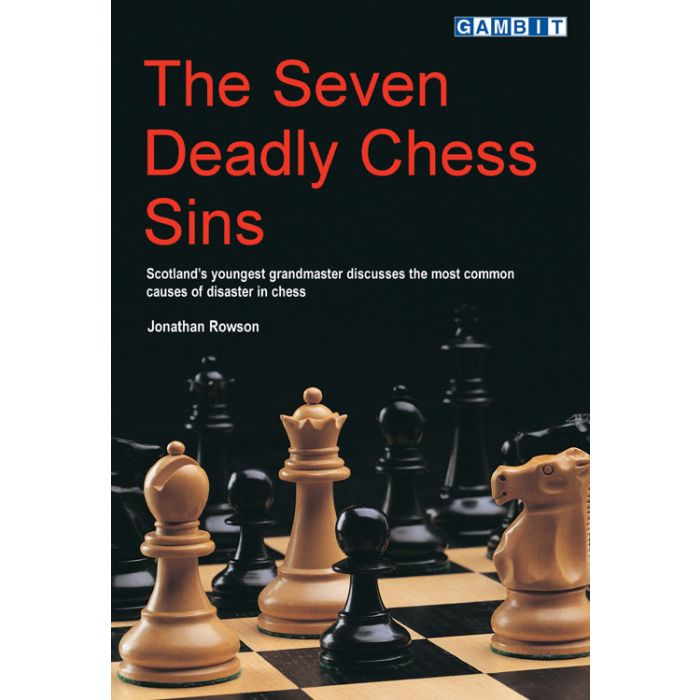 Everyone loses chess games occasionally, but all too often we lose a game due to moves that, deep down, we knew were flawed. Why do we commit these chess-board sins? Are they the result of general misconceptions about chess and how it should be played? And how can we recognize the warning signs better?

In this thought-provoking and entertaining book, Jonathan Rowson investigates, in his inimitable style, the main reasons why chess-players sometimes go horribly astray, focusing on the underlying psychological pitfalls:

-- thinking (unnecessary or erroneous)
-- blinking (missing opportunities; lack of resolution)
-- wanting (too much concern with the result of the game)
-- materialism (lack of attention to non-material factors)
-- egoism (insufficient awareness of the opponent and his ideas)
-- perfectionism (running short of time, trying too hard)
-- looseness ("losing the plot", drifting, poor concentration).

Paul Kane, www.compulsivereader.com/html/:
"Overall, the book is written in an engaging, conversational, highly readable and occasionally digressive prose style that is very appealing; Rowson is a chess writer who can actually write."

Jeremy Silman:
"A fascinating, original, insightful work by the most promising young chess writer out there. It's well worth owning (in fact, I consider it a MUST own!), and contains a bounty of knowledge that will improve your game at the cellular level if the Zen gene is a dominant one in you...Quite simply, THE SEVEN DEADLY CHESS SINS is one of the best chessbooks to come out in many, many years."

Alan Sutton, En Passant:
"Jonathan Rowson is to be congratulated on producing a book of such intellectual depth... I have now identified my sins and hopefully I will now become a better player."

GM Jon Speelman, The Independent:
"He has broken ranks by writing about playing chess as it actually is rather than it ought to be and should be greatly commended for this. This is a book which, in contrast to the vast majority of its brethren, I will continue to visit and revisit."

GM Lubosh Kavalek, The Washington Post:
"Makes splendid reading and certainly helps those chessplayers who think too much during the games, or miss opportunities, or are too greedy, or don't pay attention to material, or refuse to see another human across the chessboard, or try to be too perfect or drift while concentrating. Or all of the above."

John Watson, TWIC:
"Easily the leading book on chess psychology, by far the most useful one, very possibly a classic."

J J Walsh, Irish Times:
"Could well prove to be a leading contender for chess book of the year and may prove the most original work of its genre since Nimzowitsch's 'My System' appeared more than 70 years ago."

Bob Long, Chessco:
"Sensational. A most thought-provoking work which looks at the psychological aspects of troublesome chess."

Mark Donlan, Chess Horizons:
"Rowson himself notes that the book can be viewed as intense or evangelical. I found it absorbing. Bob Long at Chessco expects this title to be so popular he wrote on his web-site that he's ordering 50 at a time."