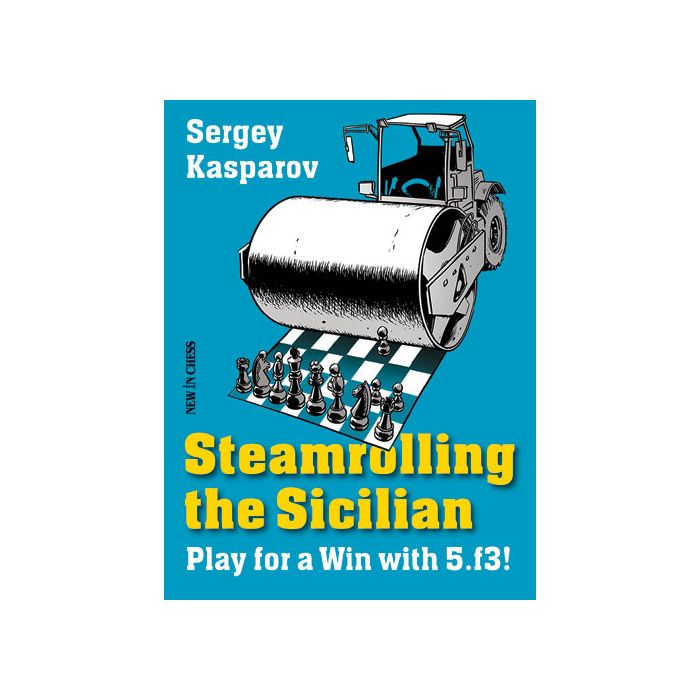 Are you looking for a way to outwit theory-sharks in the Open Sicilian? Then this may just be the book for you. The concept is simple: surprise your opponent with 5.f3, build up a strong pawn centre, avoid all of Black’s main lines and steamroll his Sicilian!

Experienced grandmaster Sergey Kasparov presents a complete repertoire for White which has all the right features for ambitious and creative chess players:

Sergey Kasparov has made a thorough and detailed study of this variation, which he himself has played for many years. He presents all the ins and outs in his usual lively and instructive style: both Black’s solid and sharp replies, and also the attempt to avoid 5.f3 by an early 3...Nf6!?.

International Grandmaster Sergey Kasparov (1968) was born in Baku, Azerbaijan, and now lives in Belarus. He has won many tournaments throughout the world and is a renowned chess opening expert.

Richard Vedder, Schakers.info:
"A book for players who like to slowly torture their opponents (..) A first-rate system, treated in a first-rate book."

GM Glenn Flear, Yearbook 109:
"The book is light and easy-going (..) The author emphasizes the pragmatic nature of the proposed repertoire: less to learn, avoiding 'pet lines', strategically sound, and so on (..) An original book, both in terms of the subject matter and SK's personal touch."

Martin Rieger, SchachWelt:
"The idea behind this: avoid theoretical battles and surprise your opponent. Furthermore, after playing 5.f3 it is almost impossible to end up in a position that is not solid."

V.B.Rumsey, British Chess Magazine:
"Ideas are well explained and each section has some exercises to keep us entertained (..) I can wholeheartedly recommend this to e4 players who use the open Sicilian and like a positional line. There is much less theory to absorb than in the main lines. Players of the Black pieces who use the Sicilian Najdorf or the Dragon may also need to study this book searching for improvements."


Joe Petrolito, Australasian Chess Magazine:
"Kasparov does a good job of explaining the key ideas and the variety of middlegame positions that can arise from the various Black responses (..) An excellent overview of an interesting variation."

Former British Champion Matthew Sadler:
"I enjoyed it greatly. The author lightens up the text with non-chess digressions and little flashes of humour (..) I felt the author had done a particularly good job in bringing across the little move order tricks you need to navigate in the early stages of the opening (..) Will definitely help you to pick up the main ideas of the opening very quickly."

German Correspondence Chess Federation:
"Kasparov explains well and makes his system plausible. With the exercises, which can be found at the end of the book, the reader can test if he has understood the system and is able to apply it in praxis."

Carsten Hansen, ChessCafe:
"A decent alternative to surprise a well-armed opponent. The book as a whole is enthusiastically written and there are many new ideas that make it worth a read."

Johan Hut, Noord-Hollands Dagblad:
"With the image of the steamroller the author indicates that all of Black's counterplay is being stopped (..) White, in the me