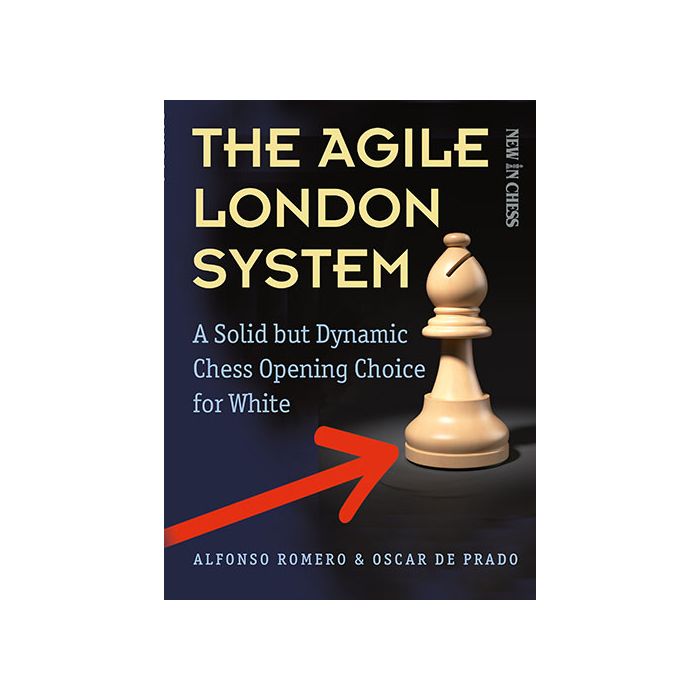 It is not difficult to understand why the London System is such a popular chess opening with club players all over the world. Against virtually every Black defence after 1.d4 it offers White an easy-to-learn and reliable set of lines with interesting choices between strategic or more aggressive approaches, while avoiding tons of opening theory.

In this light it is surprising that so little has been published about this fascinating universal weapon. GM Alfonso Romero and FM Oscar de Prado have now filled this gap. In The Agile London System they present both historical material and recent top-level examples to provide a comprehensive overview.

The authors reveal the secrets behind sharp ideas such as the Barry Attack and the Jobava Attack and have added an exciting chapter on the hyper-aggressive Pereyra Attack, developed by the Argentinean master Manuel Pereyra Puebla.

Alfonso Romero Holmes (1965) is a Grandmaster from Spain. In 1985 he finished second in the European Junior Championship, and in 1987 he won the Spanish championship. He is an acclaimed author of chess books, such as 'The Ultimate Chess Strategy Book'. Oscar de Prado Rodriguez (1973) is a FIDE Master from Spain. He has successfully been playing the London System for many years.

GM Glenn  Flear, author of 'Starting Out: the Open Games':
"The notes are frequently heavier here than in the competing books (and TALS is thus a rather thicker publication), with a liberal use of symbols as well as explanatory text. Most readers however will welcome the fact that the authors have included a wide variety of alternatives, and looked at them with such a critical eye. The London is no longer a plodders’ system, as with so much GM interest it’s becoming as critical as many erstwhile noble openings. It’s a merit-worthy work with plenty of fresh material that should ensure that it will be the reference work on the complete London System for years to come."

John Hartmann, ChessLife Magazine:
"Encyclopedic in scope, offering readers a complete London-style repertoire, and often with multiple options (..) An objective book that maps out numerous paths forward for the Londoneer."

B.H.Wilders, Nederlands Dagblad:
"An opening that is very popular at the moment has finally gotten a good book (..) A real standard work."

Sean Marsh, CHESS Magazine (UK):
"This one easily has the more in-depth coverage [than 'Winning with the Modern London System']. There are recommendations against all of Black's replies (..) The book concludes with a very interesting chapter on the Pereyra Attack (..) It is easy to see this sort of rapid attack working like clockwork at club level."

Florian Jacobs, Max Euwe Centre, Amsterdam:
"If you want to sharpen your repertoire with the London System, this is your book."