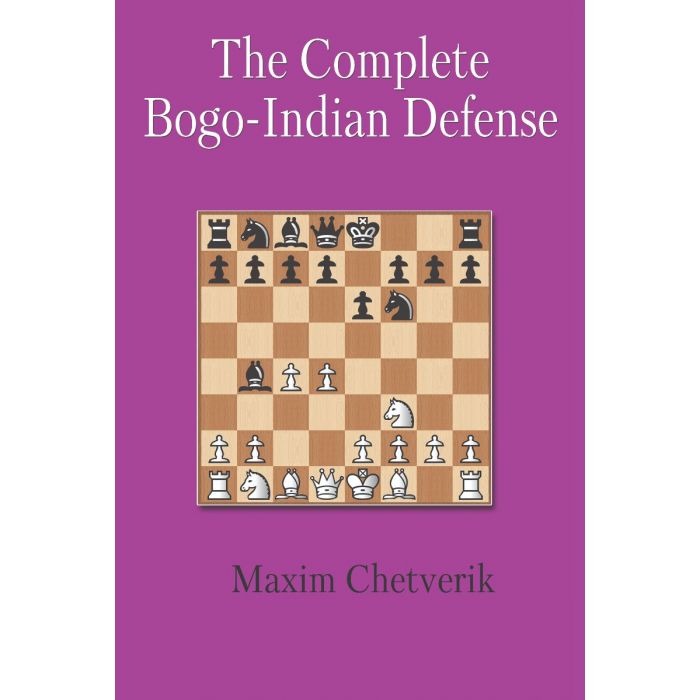 International Master Maxim Chetverik’s book covers the Bogo-Indian Defense which is normally arrived at after the moves 1.d4 Nf6 2.c4 e6 3.Nf3 Bb4+. This book additionally covers Catalan-Bogo hybrids, in particular, the Bogo response to the Catalan Opening with 1.d4 Nf6 2.c4 e6 3.g3 Bb4+. Maxim is a big expert in this opening, having played it in 76 official games as of the publication date, and one of his full games as well as several fragments from his play are included in this volume.

While this solid opening remains part of the repertoire of top-level players, it is also interesting for club players to study and adopt. Its strategic ideas are easier to absorb than those of the Queen’s Indian Defense, and black will not be required to learn as much theory as in the QID. Sharp variations are rare, and tactics play very much a subordinate role to strategy. The key focus is pawn structures, with most pawns remaining on the board in generally closed positions. Yet black retains the ability to vary the pawn and piece setup to suit his taste.

114 deeply annotated games are grouped into 20 chapters with Maxim’s carefully considered recommendations. Many of the featured games and fragments are played by world champions and supergrandmasters, including Carlsen, Kasparov, Alekhine, Anand, Kramnik, Smyslov, Korchnoi, Caruana, Short, Gelfand, Topalov, Shankland, Nakamura, Judit Polgar, Ivanchuk, Yusupov, Ding Liren, Giri, Aronian, Svidler, Hou Yifan, Timman, and many others. Many of the games are drawn from the very recent past and are not covered in previous books on the Bogo-Indian. Indeed, a large number of games from 2018-2019 are included, hence this work, which is full of Maxim’s original analysis, covers the latest theory as of the publication date.This book is essential reading for both black and white in the Bogo-Indian Defense.

Maxim Chetverik, born in Voronezh in 1963, is one of Russia's biggest chess opening experts. He has written books on the Queen's Indian Defense, Catalan Opening, English Opening, Benoni System, Queen's Gambit Accepted, Sicilian Defense, Petroff Defense, Dutch Defense, Alekhine Defense and Albin Counter Gambit, as well as more general opening books, a book on middlegame strategy, and books on the games of Alekhine, Tal and Spassky. He became an International Master in 2003 and is a regular tournament player to this day, as well as being a coach in his native Voronezh.

Grandmaster Repertoire 1A - The Catalan