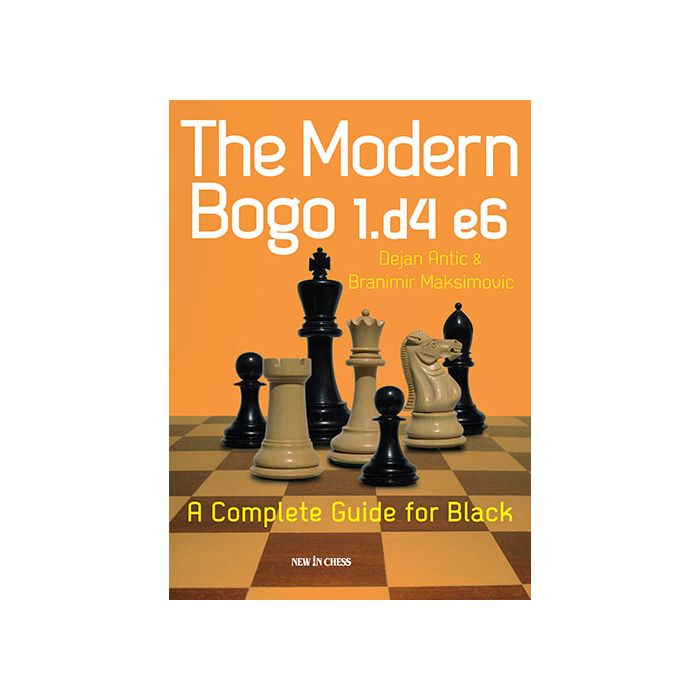 They did it! Dejan Antic and Branimir Maksimovic have created a complete chess opening repertoire for Black players in only two books.

First they wrote the acclaimed The Modern French (against 1.e4). Now The Modern Bogo provides Black players with a comprehensive answer to 1.d4. The two books complement each other perfectly.

The point is that the authors recommend to answer 1.d4 with the direct 1...e6, for the follow-up  2.c4 Bb4+. In this way they avoid complex theoretical Nimzo-Indian lines and enable both amateur and professional players to find their own way in little-explored variations.

The Modern Bogo covers all the possibilities for White after 1.d4 e6... except for 2.e4, after which you should play the French!

Antic and Maksimovic have done a massive amount of research, and found many new strategic concepts and attacking plans. All of them are explained clearly and thoroughly.

You will find that this opening not only gives you good chances to equalize as Black, but also many opportunities to play for a win.

IS THIS BOOK ONLY FOR THOSE WHO PLAY THE FRENCH WITH BLACK? OF COURSE NOT!
More than 90% of the lines that Antic and Maksimovic cover can also be reached through the standard Bogo- and Nimzo-Indian move order 1.d4 Nf6 2.c4 e6.

GM Glenn Flear, author of 'Starting Out: The Open Games':
"Perhaps the best attempt that any book has made at sorting out all those grey areas, transpositions, hybrids and move-order confusions. You really get the impression that the authors know their stuff and have taken the time to help the reader cross-reference analogous themes from elsewhere."

Martin Rieger, SchachWelt:
"The many verbal explanations loosen the book up. The authors have laid much emphasis on providing their readers not just with variations, but also with lots of texts containing historical backgrounds, indications of tactical or positional pitfalls, and other details."

Sean Marsh, CHESS Magazine:
"I enjoyed the prose explanations, of which there are plenty. They really did help me to understand the ideas behind some of the lines that have remained hitherto a mystery to me (..) The book is very nicely produced and presented with helpful conclusions and exercises."


B.H.Wilders, Nederlands Dagblad:
"The authors succeeed in explaining the various concepts and attacking plans for Black quite well. Typically, a good opening book like this is also quite useful for White and contains a lot of important general advice on improving at chess."

British Chess Magazine:
"An awesome follow-up to "The Modern French'."

Uwe Bekemann, German Correspondence Chess Federation:
"A new publication which I can recommend. It is written from the perspective of Black, but  for the white player it is also an excellent source of information."

Grandmaster David Smerdon, ChessVibes, on 'The Modern French':
"Despite my years of experience playing the French with both sides, I found myself learning an incredible amount, particularly regarding the ideas behind many of the common lines that I often employ, but, it turns out, only superficially understand."&#