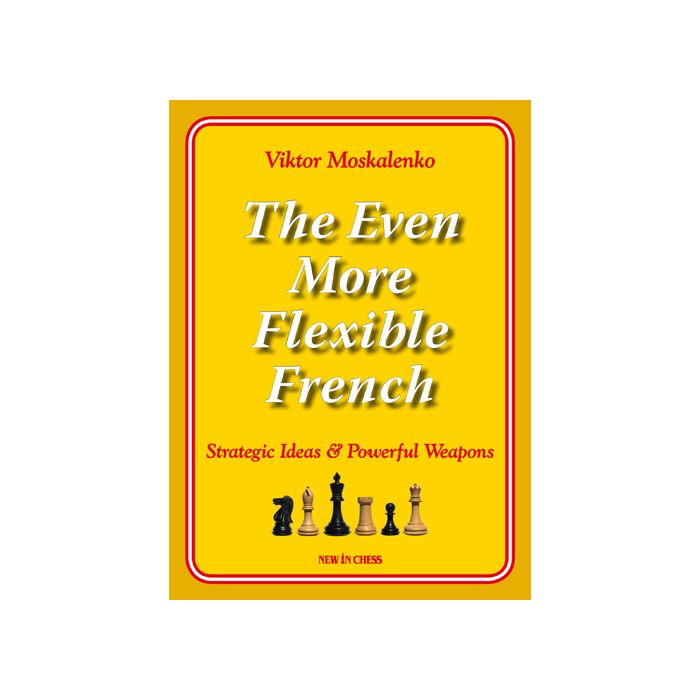 When Viktor Moskalenko’s 'The Flexible French' appeared in 2008, it caused a sensation. It was hailed by reviewers from all over the world as eye-opening, full of new ideas, easy to read, sparkling, and inspirational.

Time has not stood still, and the popular French Defence has seen a lot of new theoretical developments, not few of which were inspired by 'The Flexible French'. Seven years after its publication, Viktor Moskalenko has decided to fully revise, update and extend his modern classic.

The Even More Flexible French has largely the same structure as its predecessor, but the content is fully up-to-date on the latest theory. There are twelve new chapters on lines that have grown in importance, 28 more games, and throughout Moskalenko has found hundreds of improvements, alternatives, new ideas and fresh weapons that will delight and surprise the reader.

The book contains a more or less complete French repertoire for Black. Yet Moskalenko also presents quite a few weapons and opportunities for White. The Ukrainian Grandmaster’s analysis is, as before, high-level, his touch has remained light and fresh.

Viktor Moskalenko (1960) is an International Grandmaster and a well-known chess coach. The former Ukrainian champion has won many tournaments in Spain, his new home country. He is the author of The Fabulous Budapest Gambit (2007), The Flexible French (2008), Revolutionize Your Chess (2009), The Wonderful Winawer (2010), The Perfect Pirc-Modern (2013), and The Diamond Dutch (2014).

IM John Donaldson:
"Moskalenko does an excellent job of explaining what Black is aiming for and the 103 model games this book is structured around make it more user friendly for amateur players than the traditional opening book."

CHESS Magazine (UK):
"All French players wishing to refresh their repertoire should examine this work, both for new ideas in the main lines and some tricky surprise weapons."

Chris Wainscott, ChessIQ:
"This isn’t just a slapdash reprint where a couple of words have been changed. This is a meaningful update to in-depth content."

British Chess Magazine:
"Anybody over 1800 should seek out a copy as, believe me, White does not have it all his own way. Forty years of defending Frenches emoboldens Your Editor to add: Why didn't you say before?"

Max Euwe Centre, Amsterdam:
"Twelve new chapters, almost a hundred extra pages, dozens of new analysed games and a more accessible arrangement of chapters: the reader gets his money's worth."

Elburg Chess Reviews:
"More than just an expanded update (..) It has become a complete new book!"
Praise for 'The Flexible French':

John Watson, The Week In Chess:
"The analysis simply sparkles with ideas."

Carsten Hansen, ChessCafe:
"Moskalenko's coverage is excellently balanced. Easy to read and understand; even weaker players will benefit from Moskalenko's breakdown of the material."