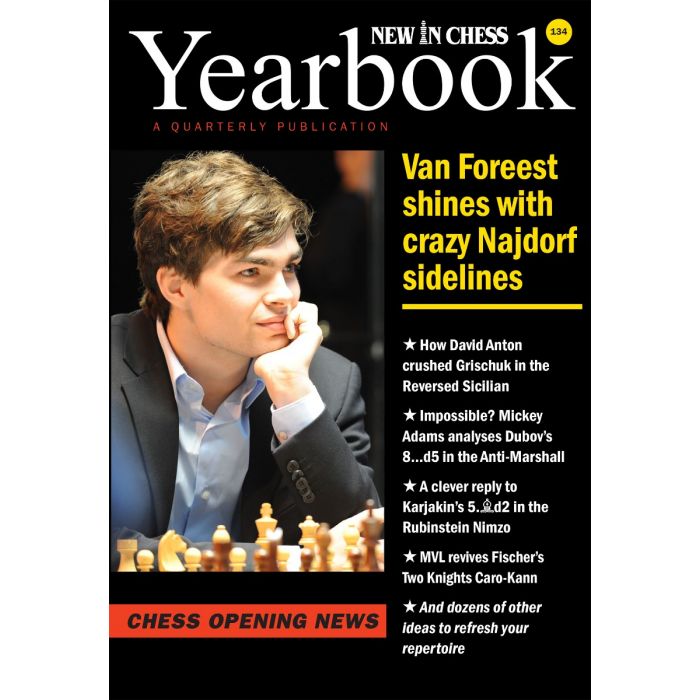 Forum
A big Forum Section this time with, of course, first the results of the Novelty of the Year contest. Who played the greatest novelty published in the 2019 Yearbooks? There is also a contribution by Robert Ris on his upset defeat of top player David Navara in the Four Knights Sicilian, Jeroen Bosch analyses his vintage Velimirovic Attack win over Jan Werle, and new contributor GM Francesco Rambaldi writes about more offbeat Najdorfs from the Tata Steel tournament. And much more!

Correspondence chess
Erwin l’Ami column again features a game by OTB GM Krishnan Sasikiran, who found a spectacular novelty in the Scotch Gambit. The Dutch GM also presents new material on the 7.d5 pawn sac in the Queen’s Indian, the Yugoslav Dragon, the Exchange Grünfeld with 7.Bc4, and the Slav with 4=Bf5.

Reviews
Glenn Flear starts his column with a review of Fabiano Caruana’s 3-volume DVD on the Ruy Lopez for ChessBase. A slightly different medium from what he is used to, but he ‘found it fascinating listening to the World No. 2 explaining his way of thinking about the various options in the Spanish.’ Three repertoire books are compared this time: Kaufman’s New Repertoire for Black and White and Christoph Sielecki’s Keep It Simple 1.d4 from New In Chess, as well as the new edition of A Startling Chess Opening Repertoire by and Chris Baker and Graham Burgess. Finally, Priyadharshan Kannappan’s surprising new book The Modernized Berlin Wall Defense is held up against the light.