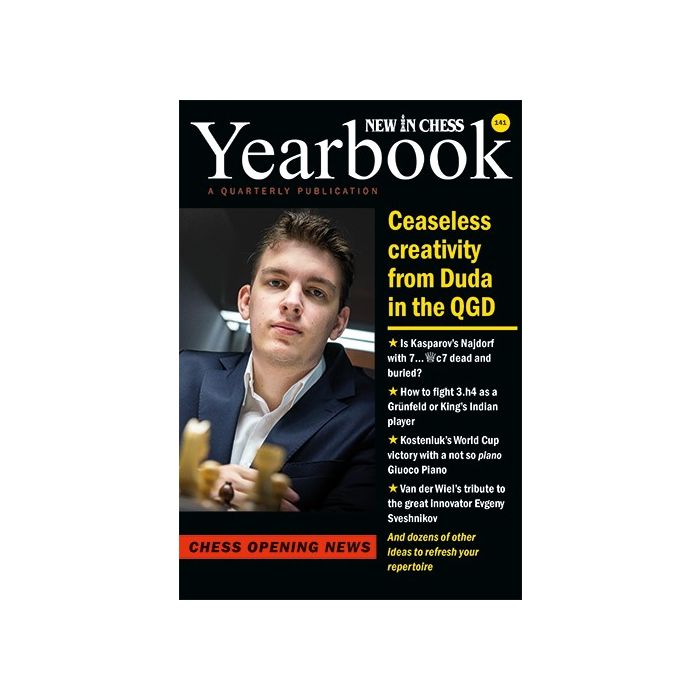 Forum
In the FORUM Section, René Olthof analyses a spectacular game by Russian GM (and Yearbook author!) Alexander Predke which might just feature the best novelty of 2021. Han Schut investigates Magnus Carlsen’s combination of 4.h4 with Nadanian’s old bizarre move 6.Na4 in the Grünfeld – is it worth a try? And Viktor Moskalenko is back – not, this time, with a French novelty, but with a special twist to a well-known gambit in the Trompowsky. There are also new insightful letters by Wayne R.Gradl and Rafal Ogiewka.

From Sadler’s Engine Room
Matthew Sadler’s second column on computer chess openings focuses on the famous TCEC SuperFinals between the Stockfish and Leela Zero engines. We get a glimpse (well – an extensive look) behind the scenes of which openings are chosen for these SuperFinals by Jeroen Noomen and… Matthew Sadler! As always, the top engines have their own, often quite surprising, approaches to these opening lines.

Reviews
Glenn Flear reviews a new book on the hot London System by Oscar de Prado – the Spaniard’s second work on this opening, this time with a quite different angle, is called The London System in 12 Practical Lessons. Fabiano Caruana has turned his DVD Navigating the Ruy Lopez into a book called Caruana’s Ruy Lopez, and it features some extremely instructive explanation from the World’s No. 2. Of course Flear also had to find out what his compatriot Gawain Jones had made of the attractive-sounding concept of Coffeehouse Repertoire (Volume 1), and finally he compares Mihail Marin’s two recent books on one opening: Leningrad Dutch and Dutch Sidelines.