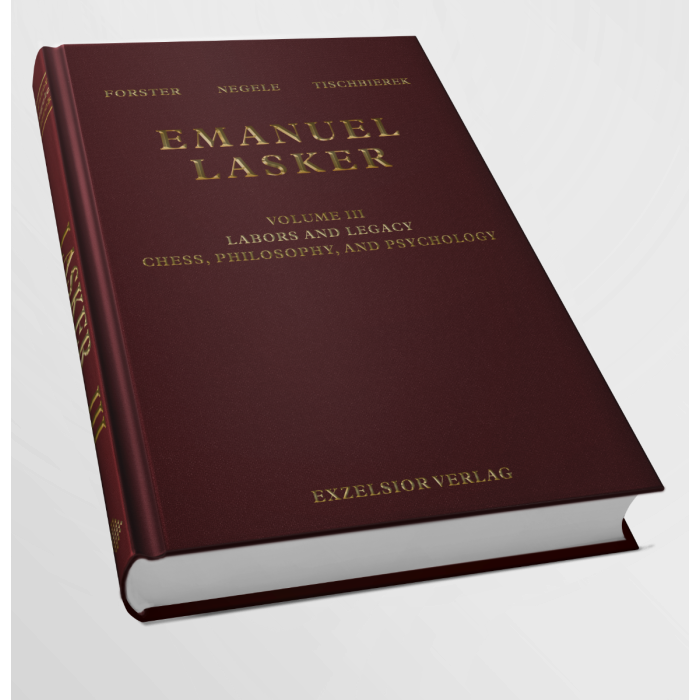 This final volume of the Lasker trilogy covers the later part of his life from 1914 onwards and his manifolds ambitions and writings in chess and science.

The biographical compass by Richard Forster shows the ups and downs of the world champion during World War I, his loss of the world championship, the subsequent economic crisis in Germany, the raise of the Nazis, and Lasker’s escape, illustrated with dozens of private documents and letters.

Sergey Voronkov paints a detailed picture of Lasker’s fantastic tournament successes in Russia between 1896 and 1936 as well as the frightening circumstances of Lasker and his wife’s life in Soviet Russia in the mid-1930s.

Jan Sprenger, Marco Baldauf, Ulrich Sieg, and Fernand Gobet share illuminating thoughts on Lasker’s endeavors as a (Jewish) intellectual in the post-war era, his scientific ambitions as a philosopher as well as his late unpublished work on psychology, which is discussed here for the first time ever.

Egbert Meissenburg and Richard Forster follow with a meticulous overview of Lasker’s rich oeuvre as a writer on chess and other games, mathematics, philosophy, and much else, with translation into more than twenty languages.

Herbert Bastian analyzes in detail Lasker’s impact as a chess writer and teacher, while Mihail Marin provides fresh insights into Lasker’s best games and spectacular success in his sixties, when in Moscow 1935 he still kept up with the world’s best.