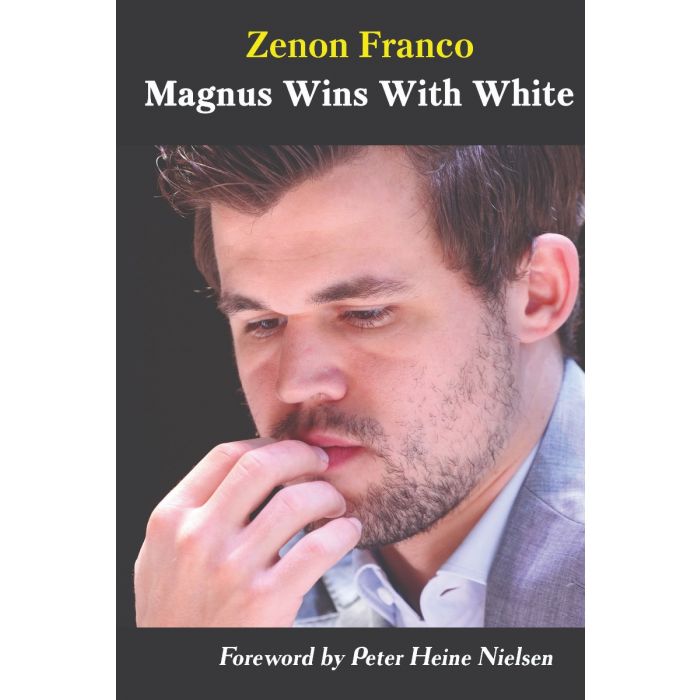 In Magnus Wins With White Grandmaster Zenon Franco deeply analyses 32 of Magnus Carlsen’s most instructive games where he wins with the white pieces. This book is written in “move by move” style, a good training tool containing exercises and tests. This format is a great platform for studying chess, improving both skills and knowledge, as the reader is continually challenged to find the best moves and the author provides answers to probing questions throughout.

Most of the games are taken from Magnus’s recent career, including one from 2020 and eight from 2019. His opponents are nearly all super-grandmasters, and they include former world champions Viswanathan Anand and Vladimir Kramnik, as well as Wesley So, Maxime Vachier-Lagrave, Alexander Grischuk, Levon Aronian, Boris Gelfand, and, naturally, Anish Giri. In the majority of these games, Magnus demonstrates his ability to outplay his opponents in the middlegame by simply making stronger moves and applying constant pressure that eventually forces the opponent to crack and play weaker moves. In some games, however, this takes place in the endgame. A second book, Magnus Wins With Black, is forthcoming.

With a foreword by Magnus Carlsen's Chief Second and Coach Peter Heine Nielsen.

Grandmaster and FIDE Senior Trainer Zenon Franco was born in Asuncion, Paraguay, in 1956.  Zenon is the author of 29 chess books published in six languages and has been a regular chess columnist of the Paraguayan Hoy and ABC newspapers for the last 17 years.