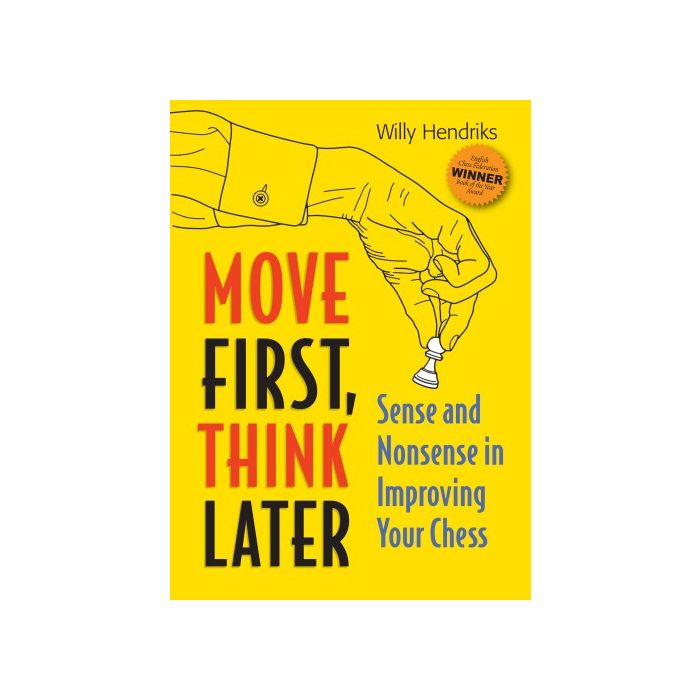 RUNNER-UP: ChessCafe.com Book of the Year 2012

3rd Edition - with a new epilogue: 'The Discussion Continues'

The chess instruction establishment claims that all you need to do is concentrate on the characteristics of a position. Stick to some rules of thumb and good moves will pop up more or less automatically.

But that is not how it works, finds International Master Willy Hendriks. Chess players, both weak and strong, don’t first make a plan before looking at candidate moves. Trial and error is a very common and in fact highly effective way to get to the best move.

In his journey into the chess-playing mind, Hendriks uses recent scientific insights in the working of our brain. He raises a number of intriguing questions:

• Can you, too (whether you are talented or not), become a grandmaster?
• Why does a chess trainer’s advice often sound like a horoscope?
• Can you find strong moves by ticking off a to-do list?
• Is it possible to reach master level without ever making a plan?

Presents a wealth of valuable, no-nonsense training material. In this refreshing, entertaining and highly instructive book, Willy Hendriks shows how you can travel light on the road to chess improvement!

International Master Willy Hendriks (1966) has been working as a chess trainer for over 25 years. Inspired by recent developments in the cognitive sciences, he challenges the conventional wisdom in chess instruction.

The Judges of the English Chess Federation Book of the Year Award:
"One of the most original chess books the judges have seen for a number of years (..) both serious and highly entertaining at the same time."

Vishy Anand, former World Champion:
"Hendriks says nobody thinks like Kotov (..) 'The forest of variations', that sounds lovely as an explanation after the game but nobody thinks like that during the game (..) Nobody is thinking in logical steps. We just take in large gulps of information and we work with that."

Steve Giddins, author of '50 Ways to Win at Chess':
“What a fantastic book! I have not enjoyed reading an instructional book so much in years. I was laughing out loud throughout, because it is very witty, but it is also a really important instructional volume.”

Hikaru Nakamura, US Champion:
"For anyone interested in chess in a broader context, I highly recommend reading 'Move First, Think Later' by Willy Hendriks."

Martin Rieger, Rochade Europa:
"After reading this book you will feel like Neo in the film The Matrix, when he discovers that his life so far was an illusion and that his real life will start only now."

Marshtower Chess Reviews:
"Readers of all playing strengths should find plenty of interest here (..) It is, by turns, inspirational, maddening, entertaining, instructive and witty. But most of all, it is thought-provoking and that seems to me to be the main point of the book."

Vijay Raghaven, ChessCafe:
"You name your favorite 'improvement' writer and in all likelyhood you will find his theories trashed in Hendriks' extraordinary book."

Kuhan Chellappah, British Chess Magazine:
"It is light yet thought-provoking, controversial but not without substance, and most importantly it i