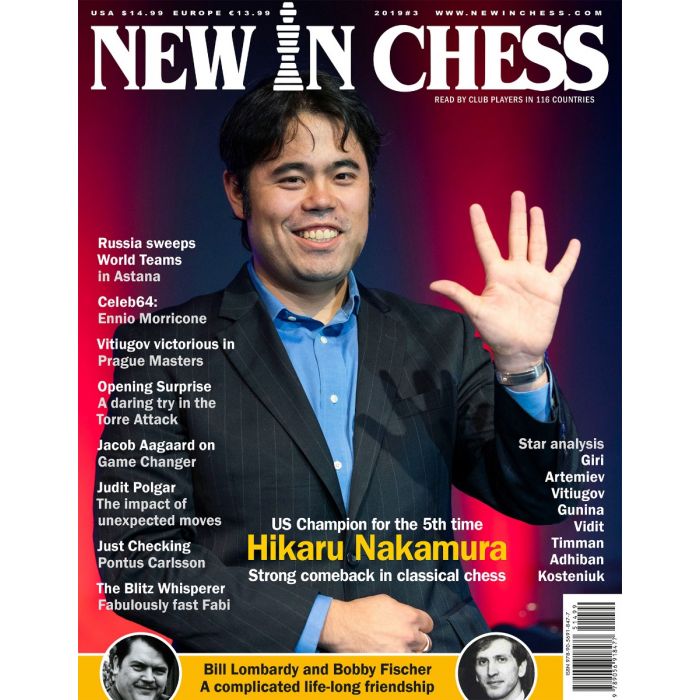 In The Good Knight in Oslo, Magnus Carlsen and Anish Giri recorded a video with a global message.

Dreamlike experiences for an 8-year-old refugee from Nigeria and a 42-year-old grandmaster from Estonia. And why talking during the game may help.

12 Nakamura turns back the clock

At the U.S. Championship in St. Louis, Nakamura regained 15 rating points and earned $50,000 with his fifth national title. Seventeen-year-old Jennifer Yu claimed the women’s title with a stunning 10/11.

What’s chess got to do with Brexit? And Woody Harrelson has a bad addiction.

At the World Teams in Astana the Russian men coasted to a convincing victory, for a good part thanks to another brilliant performance by rapidly rising star Vladislav Artemiev.

As he revisits the life-long friendship between Bobby Fischer and Bill Lombardy, Joseph G. Ponterotto points out many remarkable and sometimes uncanny parallels between their lives and personalities.

Jacob Aagaard explains what he dislikes and likes in the bestseller Matthew Sadler and Natasha Regan wrote about AlphaZero.

Nikita Vitiugov was the first winner of the top group of the new Prague Chess Festival.

Moves that your opponent didn’t see coming, can be strong and effective purely because of their psychological impact.

Jeroen Bosch dissects a daring try in the Torre Attack.

Maxim Dlugy thinks that Fabiano Caruana is a much better blitz player than people think and shows you the evidence.

A fine best games collection by Michal Krasenkow, a high-level opening guide by Ivan Sokolov and more new books to fill your shelves.

Jan Timman presents tactics and fascinating endings that he spotted in recent tournaments.

Which book would Pontus Carlsson give to a dear friend?