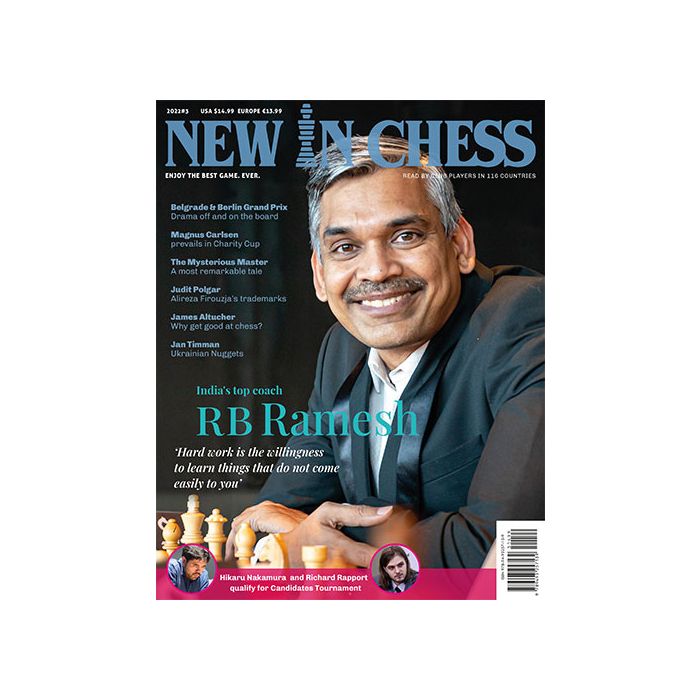 8 Mind, Art, Experience
With a retrospective, the World Chess Hall of Fame celebrates a decade of inspiring exhibitions in St. Louis.

11 Your Move
Shall I compare thee to a game of chess?.

12 Belgrade & Berlin Grand Prix
Overshadowed by Russia’s invasion of Ukraine and a devastating war, the final two legs of the FIDE GP went ahead in Belgrade and Berlin with many of the players rattled and worried about the fates of friends and loved ones. Hikaru Nakamura and Richard Rapport claimed the coveted tickets to the Candidates tournament in Madrid.

26 Fair & Square
Artist and activist Ai Weiwei sees China’s belt and road initiative as a countermove in a global game of chess.

40 Interview: RB Ramesh
India’s top coach speaks freely about his methods, the differences between India and the West, work ethics, and the special qualities of ‘Pragg’.

48 Carlsen claims Charity Cup
The World Champion seems to be on course to defend his Meltwater Champions Chess Tour title. He also won the second leg of the 2022 season, defeating Polish speed ace Jan-Krzysztof Duda in a thrilling final.

64 Adult improvement
James Altucher explains why there is a reason to get good at chess beyond just chess. Also when you’re over 50.

66 Magnus Carlsen teaches chess
A seemingly innocent line can prove to be not so simple... Perhaps because it was whispered to him by a Great Predecessor?

72 Alireza Firouzja
Judit Polgar looks at the special qualities that make the 18-year-old one of the favourites in the Candidates tournament.

77 What would you play?
Test your decision-making skills with Thomas ‘Toolbox’ Willemze.

82 The mysterious master
The most remarkable story of a highly confounding chess career.

92 Sadler on Books
The styles of Tigran Petrosian and Rashid Nezhmetdinov could not be more different. But there is a lot to learn from both, as new books show.

98 Ukrainian nuggets
Jan Timman presents the best study composers from Ukraine and treats you to some of their finest compositions.

105 They are The Champions
Janelle Mae Frayna is the national women’s champion of the Philippines.

106 Just Checking
What was the best piece of advice Nodirbek Abdusattorov ever got?