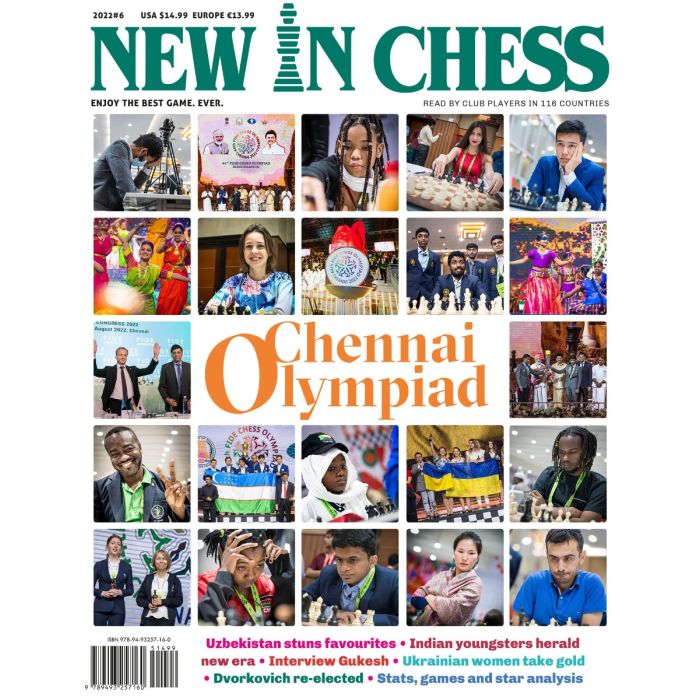 6 NIC’s Café
Warning: Thinking too hard really does tire out your brain!

9 Your Move
Peter Heine Nielsen insists that Nepo had access to a ‘super computer’.

10 Understandable or incredible?
Five experts shine their light on Magnus Carlsen’s decision not to defend his world title.

14 A Bridge to Chess
As Chennai welcomed the Olympiad, the Napier Bridge got a spectacular chess-themed makeover.

19 Fair & Square
Pop-diva Cher is too lazy to play chess.

22 Chess is coming home
Some 1500 years after the game mysteriously originated there, chess returned to India on an epic scale. Teams from 186 countries gathered in Chennai for the 44th Olympiad. Seeded only 14th, the youngsters of Uzbekistan took gold, ahead of Armenia and the hosts’ ‘junior’ team, India 2.

52 Interview: Gukesh
The Indian star speaks freely about his self-confidence, his ambitions and his role model, ‘Anand sir’.

58 Glory to Ukraine’s women
Ukraine’s victory on the chess board offered a symbolic glimmer of hope for the millions that continue to suffer under the brutal Russian invasion.

80 Adult improvement
The learning difference between doing (and then analysing what you did) and simply studying (without doing) is enormous, James Altucher argues.

83 What would you play?
Test your decision-making skills with Thomas ‘Toolbox’ Willemze.

88 Chances for everyone
At the Olympiad, Judit Polgar had particular pleasure watching lower-rated players upsetting favourites.

92 Sadler on Books
Matthew Sadler read and digested a stack of opening books.

97 They are The Champions
Pekka Köykkä is the national champion of Finland.

98 Stars of the Olympiad
Youngsters from India and Uzbekistan and a 38-year-old Olympiad ‘veteran’ from Armenia. Jan Timman looks at players that called the tune in Chennai.