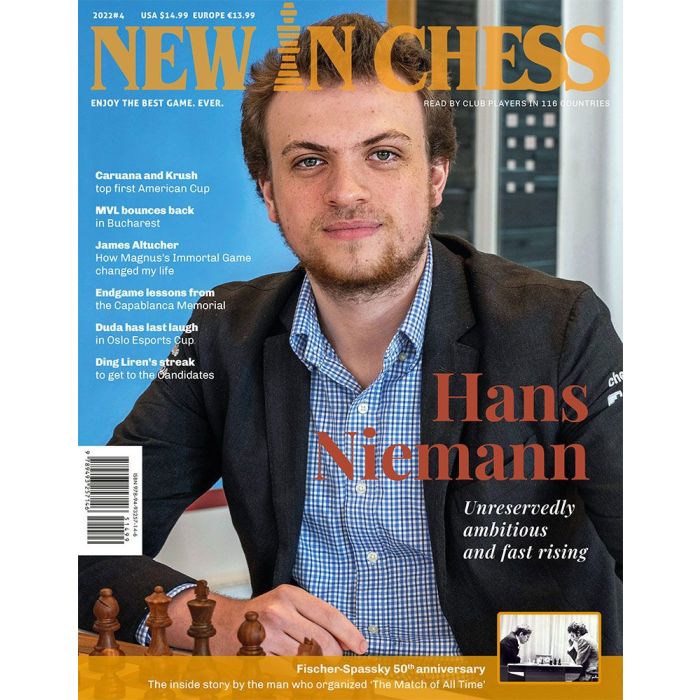 6 Giuoco piano
Chess and the beach, a perfect mix.

10 Your Move
The great lessons of coach RB Ramesh vs. the ‘opportunity cost’ of dedicating one’s youth to the full-time study of chess.

12 The Chess Story of All Time
To mark the 50th anniversary of ‘the Match of the Century’, Gudmundur Thorarinsson, the match organizer, has written down his inside story.

18 MVL finishes with a bang
Maxime Vachier-Lagrave saw an encouraging return to form in the first leg of the Grand Chess Tour in Bucharest.

30 Duda has the last laugh
The Oslo Esports Cup was a frantic race between 16-year-old Praggnanandhaa and World Champion Magnus Carlsen – until both collapsed in the final round.

44 Niemann fears no one
Last year, Hans Niemann made a stunning 150-point leap in the world rankings. The self-assured American also delivered in Malmö.

54 Endgame takeaways from Cuba
Surya Ganguly pays tribute to ‘Capa’ as he looks at crucial endgame moments from the Capablanca Memorial.

64 Caruana and Krush strike
Adopting an Esport inspired format, the inaugural edition of the American Cup in St. Louis saw a lot of action and excitement.

79 Fair & Square
Igor Stravinsky thought that Sergey Prokofiev was a better chess player than a composer.

82 Jan-Krzysztof Duda
Judit Polgar wonders how the Polish ace will fare against his rivals in the Candidates in Madrid.

87 What would you play?
Test your decision-making skills with Thomas ‘Toolbox’ Willemze.

92 Sadler on Books
The memoirs of a legendary American hustler, who calls himself ‘the last gamesman’, and of an inveterate English chess lover, who sees himself as a ‘chess crusader’.

98 Showtime in April
Jan Timman looks at the qualifying streak in back-to-back competitions that got Ding Liren a spot in the Candidates tournament.

105 They are The Champions
Chinedu Enemchukwu is the national champion of Saint Vincent and the Grenadines.