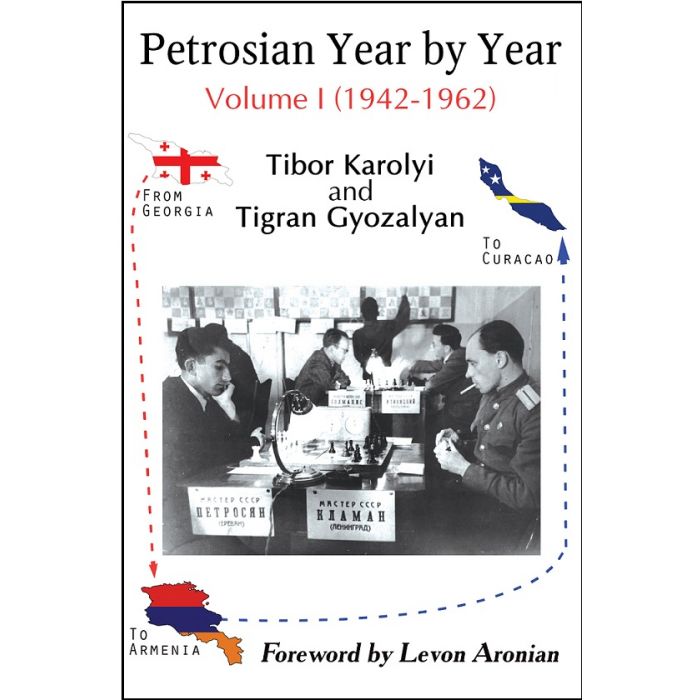 IM Tibor Karolyi and FM Tigran Gyozalyan have written a comprehensive two-volume treatise on the life and games of Tigran Petrosian, who was world champion from 1963-1969.

The present Volume I takes the reader on a journey from Tigran’s childhood, through the war years, successes in Georgian and Armenian national championships, his emergence as an elite player winning the Soviet championship and Olympic gold, and victory at the famous 1962 Candidates Tournament in Curacao.

Karolyi and Gyozalyan provide deep modern analysis of 148 full games and fragments, and summarise almost all known games played by Petrosian in the period. They also provide considerable background colour on each game, with round-by-round analysis of tournaments and matches in which they were played. Very few of these games have previously been analysed in detail in modern books, and those that were have nevertheless been subjected to considerably improved analysis.

Petrosian’s opponents in Volume I include world champions and challengers Fischer, Tal, Spassky, Botvinnik, Smyslov, Euwe, Korchnoi, and Bronstein, as well as leading players such as Keres, Geller, Benko, Polugaevsky, Reshevsky, Taimanov, Kotov, Gligoric, and many others. There is a special focus on his coaches Ebralidze, Lilienthal and Boleslavsky.

An added bonus is the inclusion of rare photos taken from private collections in Georgia and Armenia, many of which have never before been published in the West.

With a foreword by the greatest Armenian chess player of modern times Levon Aronian.