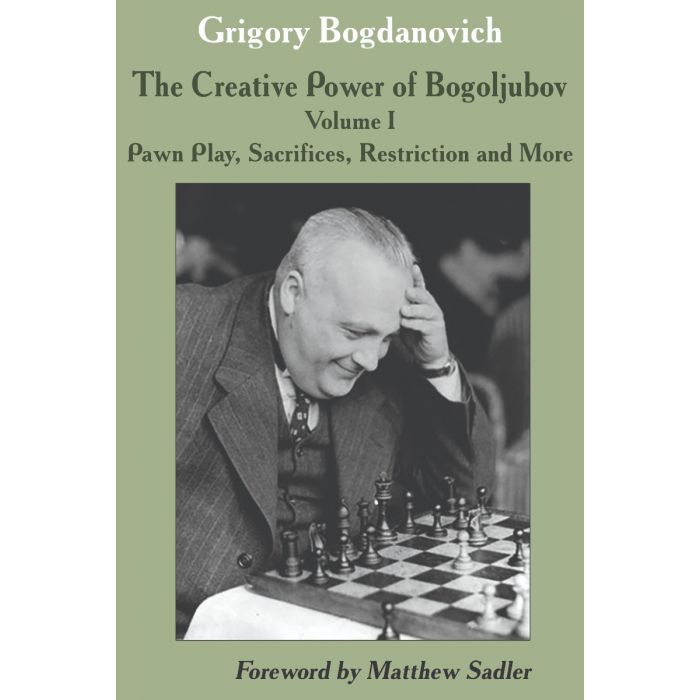 About / The Creative Power of Bogoljubov Volume I

Efim Bogoljubov was one of the world’s very strongest players in the 1920s and 1930s. Twice he played Alexander Alekhine for the world championship title (1929 and 1934) and he won the famous Moscow 1925 tournament, ahead of Jose Capablanca, Emanuel Lasker and many other stars. He also won the Soviet championship in 1924 and 1925, as well as a host of other international tournaments. His play featured many sparkling combinations, as well as a deep positional understanding.

International Master Grigory Bogdanovich has written a two-volume treatise on Bogoljubov’s life and games, covering over four hundred fully annotated games and fragments over both volumes. His analysis of Bogoljubov’s games is split into instructive themes, making his treatise a fantastic textbook for learning a huge range of winning techniques. In the present Volume I, which contains 194 games and fragments, Bogdanovich covers the topics of objectivity, imagination, combinational play, piece and pawn sacrifices, play with rook’s pawns, pawn phalanxes, restriction play, conversion of an advantage, exchanges and central strategy. Drawing on contemporary sources with the addition of modern computer analysis, the author provides annotations by Bogoljubov himself, Alekhine, Lasker, Mikhail Botvinnik, Aron Nimzowitsch, Savielly Tartakower, Hans Kmoch and many other famous players and teachers.

The biographical section will also be of immense interest to chess historians. It contains a number of original documents written by and to Bogoljubov previously unpublished in the West, and in some cases not published at all. They were originally selected by the late Anatoly Matsukevich, who had planned to write his own biography of Bogoljubov and who had obtained these documents from Bogoljubov’s personal archive. Topics covered include plans for a match against Capablanca and an earlier match against Alekhine before the latter became world champion, neither of which materialized. The book also contains a number of photos of Bogoljubov, from both chess and family life. With a foreword by Matthew Sadler.

Grigory Bogdanovich (born in 1949) began work as a chess coach in the early 1980s. He was awarded the USSR Master of Sport title in 1983 after successful results in the Moscow team championship, during which his famous opponents included David Bronstein, Artur Yusupov and Andrei Sokolov. Later, he was twice Soviet Correspondence Chess Champion as part of the victorious Moscow team. In 1990 he graduated for the second time, from the Higher School of Coaches, after previously gaining a degree in engineering and economics. He has recorded a string of victories in international chess tournaments, and gained the International Master title in 1991. Grigory lives in Germany and spent over a quarter of a century playing for Bad Mergentheim chess club (Baden-Wurttemberg). He has written several opening books in English and Russian as well as jointly authoring with Tomasz Lissowski a book on Szymon Winawer (published in Russian in 2017). He is currently writing a book on Rudolf Spielmann.