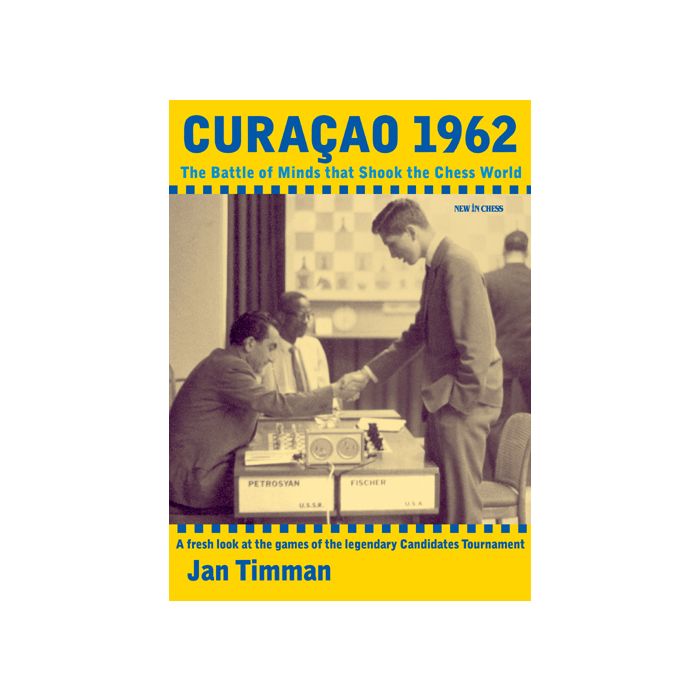 Due to high interest, the signed and limited hardcover edition is sold out. Other editions are still available.

The 1962 Candidates’ Tournament in Curaçao was one of the fiercest chess battles of all time. At the height of the Cold War, eight players contested the right to challenge World Champion Mikhail Botvinnik. The format of the tournament was a gruelling quadruple round-robin. Twenty-eight games were to be played on the tropical island, in a contest that lasted two months.

The air trembled with drama and intrigue. One of the favourites, the brilliant Mikhail Tal,was taken to hospital after 21 rounds and had to withdraw. Three other players from the Soviet Union, Keres, Petrosian, and Geller, were making suspiciously short draws when playing each other. The two American players came to blows over the services of the second they were supposed to share.

Bella Kortchnoi, whose husband took an early lead in the tournament, was a puppet in the hands of the scheming Rona Petrosian, the wife of the later winner. And one of the favourites was a lanky 19-year-old boy from Brooklyn, Bobby Fischer, who openly accused the Soviets of collusion and was later proven right.

In the end, Tigran Petrosian was the winner and went on to become the new World Champion the following year. But such was the impact of Fischer’s accusations that this was the last time such a battle was organised. Henceforth the challenger to the highest crown was determined in a series of matches. Curaçao 1962 was the last Candidates’ Tournament until the concept was restored only in modern times.

In Curaçao 1962, Jan Timman returns to this clash of giants and takes a fresh look at the games. Timman describes the course of the tournament and annotates the most important games (including 16 of Fischer’s!) in his usual lucid and instructive style. Curaçao 1962 revives a tradition of great tournament books, such as Alekhine’s New York 1927 and Bronstein’s Zurich 1953.

Shortlisted for the British Chess Federation 2005 Book of the Year Award.