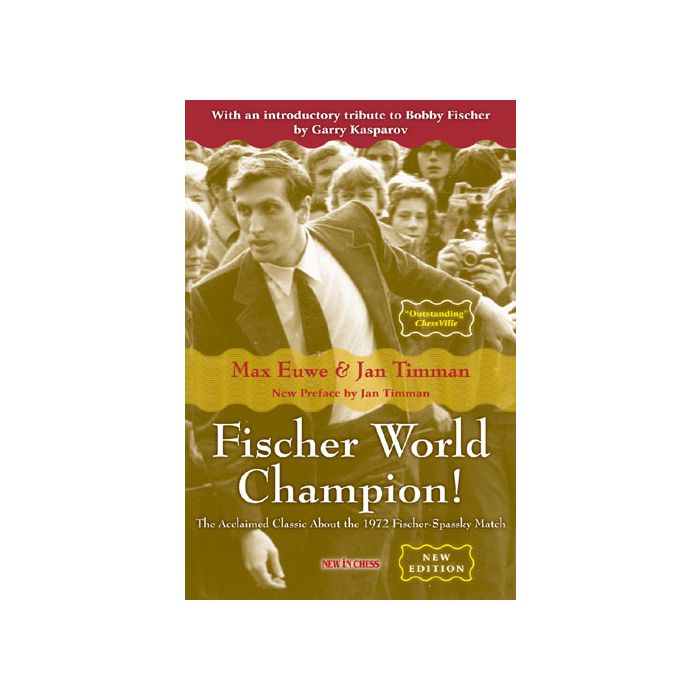 In 1972 a boy from Brooklyn broke the hegemony of Soviet chess.

Bobby Fischer, the greatest genius the game had ever seen, completed his crusade against the ‘commie cheaters’ by defeating Boris Spassky in Reykjavik.

The Match of the Century electrified the world. No one wanted to miss even the slightest detail about the struggle of Fischer against the superpower that for decades had exploited its superiority in chess as an irrefutable justification of communism.

Almost a year before the first move was made at the board, the infighting started. The world looked on in anxiety as Bobby quarrelled about the venue,  the number of games, the prize-fund, the television rights, the camera’s, the lighting, and about the chairs.

The acclaimed classic Fischer World Champion! conveyes the full drama of the clash, both on and off the board.

Here is the inside story of the bloody prelude, written by the late Max Euwe, at the time President of FIDE. Euwe’s diplomatic skills and iron will saved the match against incredible odds.

With the original analysis of the games by Jan Timman, one of the world’s finest analysts.

Fischer World Champion!  will let the reader relive one of the great moments in chess history.

This New Edition commemorates the death of Fischer in January 2008 with a tribute by former World Champion Garry Kasparov and an essay by Jan Timman on the life and chess of Bobby Fischer.

From the introduction by Garry Kasparov:
“Bobby Fischer created a global boom and single-handedly dragged chess into the professional era we live in today. Chess has lost its greatest knight.”

The Judges of the British Chess Federation Book of the Year Award:
“There is no better book on the most famous of all World Championship Matches”

British Chess Magazine:
"One of the most insightful accounts of Fischer the chess player"