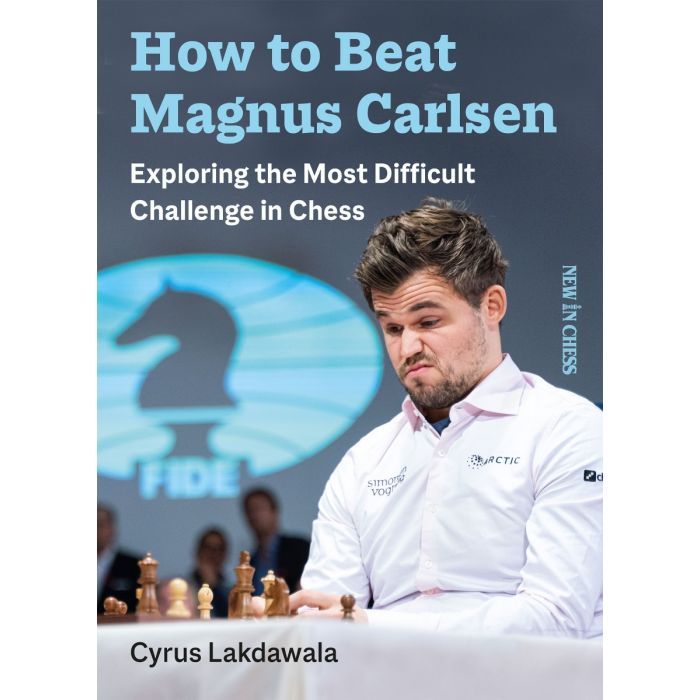 Magnus Carlsen is arguably the strongest player of all time. His dominance is such that every loss comes as a shock. They remind us that even he has his weak moments. In fact, identifying the root causes of his losses holds valuable lessons for all players.

Cyrus Lakdawala’s search starts with a series of Magnus wins and draws to give the reader a feel for how incredibly difficult it is to beat him. The World Champion’s arsenal is awesome: a superlative ability to calculate, near-perfect intuition, probably the best endgame technique ever, a wide and creative opening repertoire, a willingness to unbalance the position almost anytime, and last but not least: his unparalleled will to win.

How to Beat Magnus Carlsen has a thematic structure, which, together with Lakdawala’s uniquely accessible style, makes its lessons easy to digest. Sometimes even Magnus gets outplayed, sometimes he over-presses and goes over the cliff’s edge, and sometimes he fails to find the correct plan. And yes, even Magnus Carlsen commits straightforward blunders. Lakdawala explains the how and the why.

It’s wonderful to have a World Champion who is not just incredibly strong, but who is also happy to experiment and take risks. That’s what makes Magnus Carlsen such a fascinating chess player. And that’s why he is the hero of this book. There is no doubt that Carlsen has examined all his losses under a microscope. If he benefits from this process, then so will we.

Cyrus Lakdawala is an International Master who lives in San Diego, CA. He has been teaching chess for four decades and is a prolific and widely read author. Much acclaimed books of his are How Ulf Beats Black, Clinch It! and Winning Ugly in Chess. He twice won the Best Instructional Book Award of the Chess Journalists of America (CJA), in 2017 for Chess for Hawks and in 2020 for In the Zone: The Greatest Winning Streaks in Chess History.

Praise for How to Beat Magnus Carlsen

“How to make the World Champion lose. It is an appealing subject because if we can see the secrets of success on how to defeat Magnus then surely it will help our own game. The American author heavily annotates the games to provide entertainment and search for positions that might be instructive for improving players. The survival guide to the ultimate chess challenge.”
IM Gary Lane, Chess Moves Magazine

“The popular Californian IM is not a man to shirk a challenge. He is a big Carlsen fan and, indeed, one might arguably claim that this book merely reinforces just how strong Magnus is. It begins by examining a number of his wins and escapes from danger before progressing to a discussion of his weak points (yes, there are a few!) and the discussion of the opponents the champ finds toughest to meet is especially interesting.”
CHESS Magazine

“It is no surprise that it takes an exceptional effort to beat him and his mistakes are noteworthy. Lakdawala uses this to his advantage. His instructive annotations, interspersed with exercises to engage the reader in the learning process, emphasize explanatory prose with concrete variations given only when needed.”
IM John Donaldson