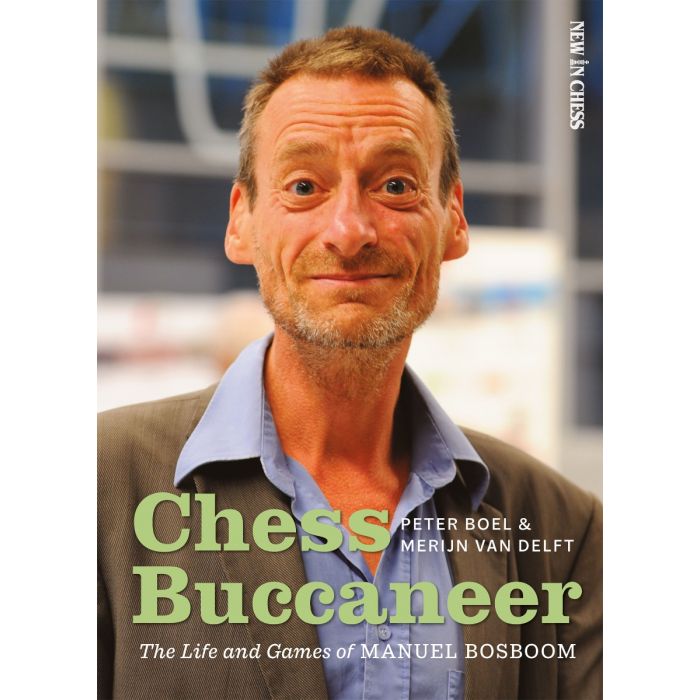 There aren’t many chess players who can say they’ve both beaten Garry Kasparov in an official blitz game and crushed Peter Leko in a classical game in 26 moves. And who regularly win blitz tournaments high on marihuana. But then Manuel Bosboom is not an ordinary chess player.

The Dutch International Master never made it to the top in chess, but over the course of his swashbuckling career he has produced an astonishing amount of brilliantly creative games. When Manuel Bosboom enters the room, a smile appears on every chess player’s face. Not only is he an exuberantly colourful player, he also leads an unconventional existence. His enthusiasm for the game and zest for life are highly contagious.

This book offers a captivating collection of games and it also describes the adventurous life of the ‘Wizard from Zaanstad’, who grew up and still lives in a picturesque shed next to a 17th century windmill on the famous Zaanse Schans. You will be treated to many a stunning chess move, a wealth of hilarious but also touching stories and a vivid impression of the Dutch chess scene in the late 20th and early 21st century.

Peter Boel is a FIDE Master and a sports journalist who works as an editor with New In Chess. He is the author of two collections of short stories (in Dutch). Merijn van Delft is an International Master  who has been a chess trainer for more than two decades. His book Mastering Positional Sacrifices was published in 2020 to wide acclaim.

“The book is really strongly recommended. Nice anecdotes, a peek into Manuel’s private life and a lot of games and game fragments.” -- Richard Vedder, Schaaksite

“Both Manuel’s life and his games are extensively described, and he is not spared by the authors. Not by Peter Boel, who is regularly referring to Manuel’s drinking habits, and not by Merijn van Delft, who never hesitates to add two question marks [after a move] when necessary. Nevertheless, the content is cheerful and good-humoured, which is entirely in line with Manuel’s eternal optimism.” -- Werner Moller, ChessFellow

“Rarely I have read a chess book that radiated so much joy. The authors admire Bosboom and obviously had a lot of fun writing it. Beautiful games, fabulous moves, awful blunders. You will see lots of anecdotes about Manuel and drugs, Manuel being late, Manuel being much too late, Manuel the author, Manuel living creatively, Manuel and alcohol, Manuel playing way too many tournaments in a row, Manuel as a coach(!), Manuel and Buddha.” -- Renzo Verwer, author of ‘Bobby Fischer for Beginners’

“This book is a tribute to the most famous IM in the world – which GM doesn’t know him? – and provides you with insights on how to impose your will on your opponent with courage, creative play and always thinking ahead. This book is a must for chess players who want to take not steps but jumps.” -- Jeannot Tuijnman, ChessFellow